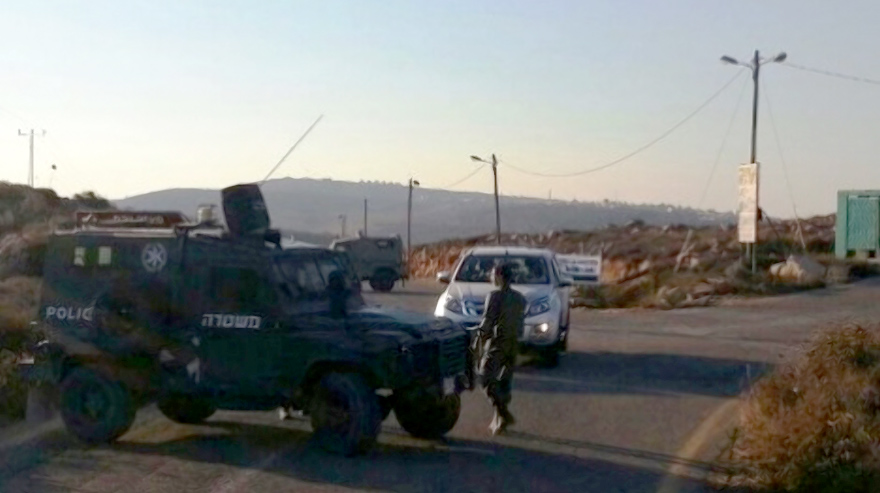 Residents of Geulat Tzion were outraged when Rabbi Meir Goldmintz was arrested and dragged by police officers merely for being present on the hilltop.

The hilltop of Geulat Tzion in Gush Shilo has experienced constant harassment by the Shabak, Nationalistic Crimes Unit, and other governmental agencies for the past few months.

During the week of June 5th, the lines were crossed once again. In an interview with Hakol Hayehudi, Avraham Sagron, who lives on the hilltop and learns in the yeshiva, described the ruthless brutality of police during a raid on the hilltop.

He first noted that a yeshiva was recently started on the Geulat Tzion hilltop and around 10 students learn in the yeshiva. On Sunday June 5th, Rabbi Meir Goldmintz gave a shiur to the students in the yeshiva. During the shiur, Shabak and police officers from the Nationalistic Crimes Unit raided the hill. They entered the Beis Midrash where the shiur was taking place and dragged Rabbi Goldmintz from the building.

This was despite the protests of the students, who attempted to explain that Rabbi Goldmintz recently underwent surgery for a broken leg. The brutality of the police caused Rabbi Goldmintz tremendous pain. The officers dragged the Rabbi all the way to the bottom of the hill, where they showed him an order declaring the hilltop a closed military zone. Police officers explained to the Rabbi that Jews were banned from walking on the hilltop. After showing the police showed Rabbi Goldmintz the order, they released him.

Sagron further noted that the police from the Nationalistic Crimes Unit have constantly torn down the eruv for Shabbat that was set up by the yeshiva students. Additionally, the police seized several chickens and ducks belonging to the residents and refuse to return them.

Sagron highlighted the dedication of the students to learning Torah and settling the land of Israel despite all of the harassment by the authorities.