REWIND: FBI Shuts Down Russian Spy Ring for Getting Too Cozy with Hillary Clinton 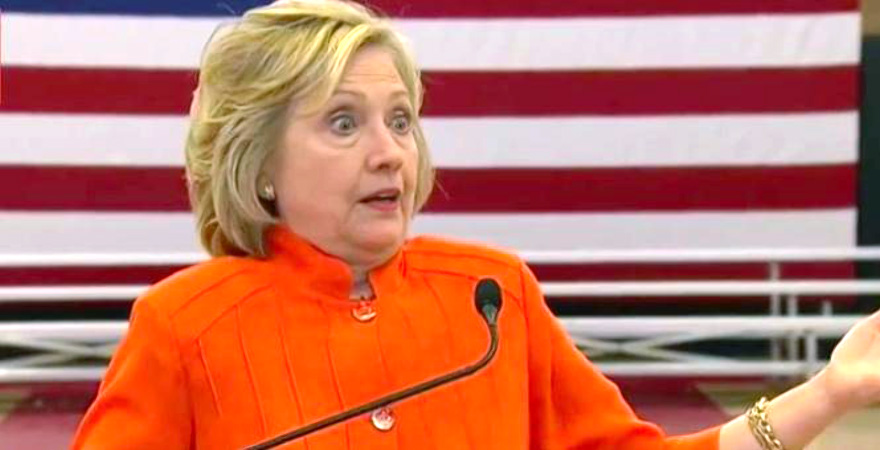 With the Democratic Party set to officially anoint Hillary Clinton as their presidential candidate during the Democratic National Convention in Philadelphia this week, and with accusations of Republican candidate Donald Trump’s supposed close associations with Russia, it is worth noting that Clinton has her Russia issues as well.

In March 2009 (the early days of Clinton’s tenure as secretary of State), in Clinton’s first meeting with Russian Foreign Minister Sergey Lavrov, she presented him with a “reset” button said to be emblematic of the Obama administration’s new openness to Russia after the Bush administration.

Sadly, for Clinton, the word printed on the “reset” button was “peregruzka” [“overcharged”] rather than “perezagruzka” [“reset”].

That is not the only occasion that Clinton has got “lost in translation” with Russia.

Just yesterday the Clinton campaign blamed Russia for the hack on damaging internal DNC emails released by WikiLeaks this past Friday that revealed a cozy relationship between the DNC and Clinton during the Democratic primaries. 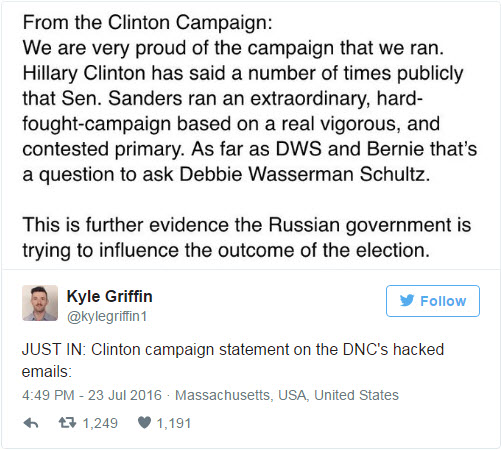 So it is a bit embarrassing that two years ago today, Clinton bragged in an interview with NPR that the Russia “reset” worked:

And yet even the pro-Hillary shills at the Washington Post have admitted that Clinton’s Russia “reset failed.

Take, for instance, one ABC News Radio report from April 2012 that a Russian spy ring was taken down by the FBI in 2010 because one of the spies was getting close to Clinton:

A female Russian agent got “close enough” to a sitting U.S. cabinet member that the FBI felt they had to swoop in and arrest the lot — but it wasn’t the famous femme fatale Anna Chapman, federal officials said Tuesday.Chapman, the seductive 20-something SoHo spy, was named by a British newspaper Monday as the reason the FBI decided to finally round up the Russian ring, which had long been under surveillance, in 2010. The paper cited an interview conducted by the BBC with the FBI’s counter-intelligence head Frank Figliuzzi.

“We were becoming very concerned they were getting close enough to a sitting U.S. cabinet member that we thought we could no longer allow this to continue,” Figliuzzi said.

But Figliuzzi never named the Russian agent in question. And although the BBC ran images of Chapman — as well as shots of a look-a-like — during the interview, now the FBI says he wasn’t talking about her at all. Instead, officials at the Department of Justice told ABC News Figliuzzi was referring to another of the arrested spies, Cynthia Murphy.

According to court documents relating to the spies’ arrest, Murphy had been in contact with a fundraiser and “personal friend” of Hillary Clinton, who took the office of Secretary of State in January 2009. The fundraiser, Alan Patricof, said in a 2010 statement that he had retained Murphy’s financial services firm more than two years before, had met with her a few times and spoke with her on the phone frequently. Patricof said they “never” spoke about politics, the government or world affairs.

A spokesperson for Clinton told ABC News in 2010 that at the time there was “no reason to think the Secretary was a target of this spy ring.”

At the time, Attorney General Eric Holder said that they considered the threat “a serious thing.”

A July 2010 report in the Washington Post adds more to the story:

Take, for example, Cynthia Murphy, the woman from Montclair, N.J., who worked for a Manhattan tax-advice firm, Morea Financial Services. One of the firm’s clients was New York financier Alan Patricof, a major supporter of former president Bill Clinton and a friend of Secretary of State Hillary Rodham Clinton.In a Feb. 3, 2009, electronic message to Moscow Center, Murphy reported that she had “several work-related meetings” with a New York financier who was an active political fundraiser and “a personal friend of [current Cabinet member whose name was omitted],” according to the original indictment. In return, Moscow Center tasked Murphy before “Obama’s trip to Moscow” to find information on the U.S. strategic arms treaty, Afghanistan and Iran’s nuclear program. There is no indication she picked up any information from Patricof.

Then there is the ongoing quid pro quo scandal concerning the Clinton Foundation receiving money from investors of Canadian firm Uranium One at the same time that the Committee on Foreign Investment in the United States (CFIUS), which Hillary Clinton sat on, was deliberating approval of the sale of a majority stake in Uranium One to Rosatom, the Russian atomic energy agency.

The CFIUS fast-tracked the Uranium One approval in 52 days, despite a mandatory 75-day review process.

And as the New York Times reported, former President Bill Clinton received $500,000 for a speech in Moscow from a Russian investment bank with links to the Kremlin that was promoting Uranium One stock.

Despite Hillary’s media apologists saying there is no evidence of a quid pro quo, the Treasury Department has obstructed FOIA requests related to the CFIUS approval of the Uranium One sale, prompting government watchdog Judicial Watch to file a federal lawsuit last December to compel disclosure on the approval process and any documents by Hillary Clinton related to the matter.

So when Clinton’s defenders throw stones at Donald Trump over his Russia ties, they should be mindful of Hillary’s glass house.