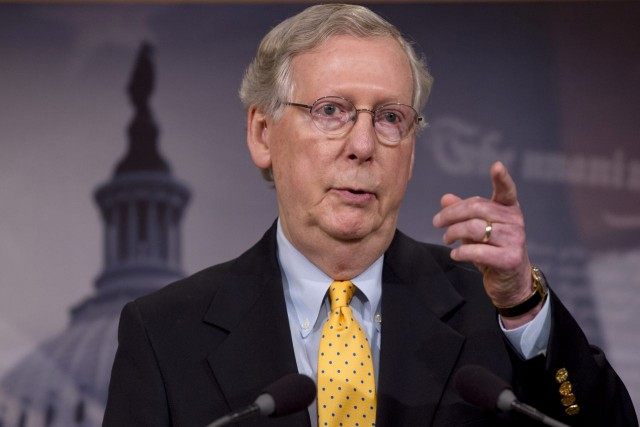 The Senate on Monday delivered a strong vote of confidence to a bipartisan spending bill that’s needed to head off a government shutdown at midnight Wednesday.

The 77-19 vote powers the measure past a filibuster by some of the chamber’s most ardent conservatives, who were angered that Majority Leader

Sen. Mitch McConnell stripped a provision that would cancel federal funding of Planned Parenthood in exchange for keeping the government open.

McConnell is under fire from tea partyers who demand that he fight harder against Planned Parenthood – even at the risk of a partial government shutdown – but McConnell is more concerned with protecting his 2016 re-election class from political damage if Republicans are blamed for a shutdown.

Last week, Democrats led a filibuster of a Senate stopgap measure that would have defunded Planned Parenthood. Eight Republicans did not support that measure, leaving it short of a simple majority, much less the 60 votes required to overcome the filibuster.

The current bill is “the only viable way forward in the short term,” McConnell said. “It doesn’t represent my first, second, third or 23rd choice when it comes to funding the government, but it will keep the government open through the fall.”

The Senate is expected to approve the bill Tuesday and send it to the House.

The White House endorsed the measure since it would allow “critical government functions to operate without interruption, providing a short-term bridge to give the Congress time to pass a budget for the remainder of the fiscal year.”

The Planned Parenthood fight helped topple House Speaker John Boehner, who announced his resignation last week after informing several conservatives that he would not use the must-pass spending measure to take on the group.

The measure would keep the government’s doors open through Dec. 11, but the battle is sure to be rejoined then – at a potentially greater risk of a shutdown.

Republican presidential candidate Sen. Ted Cruz served notice that he will be part of that fight.

The Texas lawmaker assailed his GOP leadership, saying it “reflexively surrenders at the outset,” while complimenting Democrats for their willingness to “crawl on broken glass with a knife between their teeth” to fight for their policies.

Republicans have targeted Planned Parenthood for years, but the release of secretly recorded videos that raised questions about its handling of fetal tissue provided to scientific researchers has outraged anti-abortion Republicans.

The group says it is doing nothing wrong and isn’t violating a federal law against profiting from such practices.

In the House, two key committees have released a draft of filibuster-proof budget legislation that would defund Planned Parenthood and keep a promise made during this spring’s budget debate to repeal key elements of Obama’s signature health care law. Panel votes are expected Tuesday and Wednesday.

The proposal would permit Republicans to deliver to Obama a measure to take away about $350 million in taxpayer funding Planned Parenthood now receives through the Medicaid program to provide health services to low-income women.

Most of the money would be redirected to community health centers. It would also, after dozens of attempts, send a partial repeal of the Affordable Care Act to Obama’s desk for the first time, under fast-track rules for budget legislation known as reconciliation.

Obama has threatened to veto the measure.