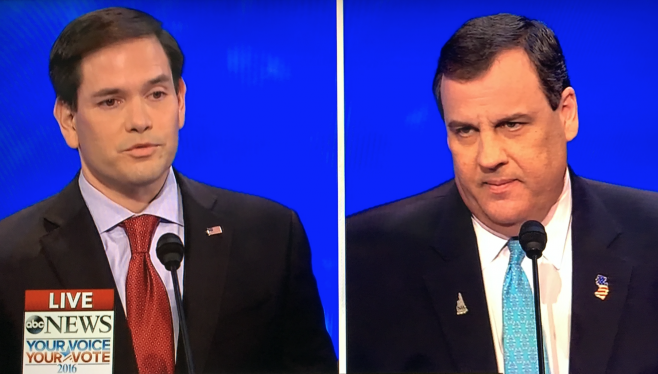 Early in the debate, Senator Rubio was asked about his accomplishments in politics. He gave a short answer naming a few mostly unmemorable items and then strangely turned to this: “Let’s dispel once and for all this fiction that Barack Obama doesn’t know what he’s doing. He knows exactly what he’s doing. Barack Obama is undertaking a systematic effort to change this country.”

The rest of the answer followed Rubio’s well-worn “America is the greatest nation in the history of the world” theme. It was fine as a political concept and received applause from the audience but in that moment it felt misplaced and scripted.

It’s one thing for a politician not to answer a tough question. It’s another thing to do so in such an utterly transparent way, a way that isn’t even tangentially related to the subject matter at hand and is obviously designed to deflect. It was all the more surprising because the question of Rubio’s experience and accomplishments was the single most predictable topic of the evening.

The other most predictable aspect of the debate was that New Jersey Governor Chris Christie, seeing Rubio as his primary obstacle to a must-finish-in-the-top-three result in New Hampshire, would go after Rubio as he has in recent days — as inexperienced and overly controlled and protected by his campaign. And that’s just what he did.

ABC’s debate co-moderator, David Muir, went immediately from Rubio to Christie, beginning one of the two most memorable back-and-forth interactions of the night (the other being Jeb Bush slamming Donald Trump on the issue of eminent domain).

Christie emphasized the difference between senators, who “drop bills and give speeches,” and governors who make “consequential decisions where you have to be held accountable.” He landed another immediate jab at Rubio: “When you talk about the Hezbollah Sanctions Act that you list as one of your accomplishments, you weren’t even there to vote for it. That’s not leadership, that’s truancy.” Ouch.

Gov. Christie closed his initial remarks by re-emphasizing that legislators talk while governors solve problems, then reminding the audience that “for the last seven years” we’ve seen what happens when you elect a young unaccomplished senator.

Rubio began by noting that New Jersey’s debt has been downgraded repeatedly during Chris Christie’s governorship and suggested that Christie would therefore be unable to deal with our nation’s financial situation. OK, Marco, that sounded slightly desperate, rummaging through your oppo research and again not answering the fundamental question that voters, not just Chris Christie, want to know about you. So what else do you have for us?

And this is what Rubio had instead: “Let’s dispel with this fiction that Barack Obama doesn’t know what he’s doing. He knows exactly what he’s doing. He is trying to change this country.” The audience, along with your humble correspondent, sat in stunned silence.

Christie responded forcefully: “You see, everybody, that’s what Washington, D.C. does: the drive-by shot at the beginning with incorrect and incomplete information and then the memorized 25-second speech…”

And the crowd goes wild!

And Christie wasn’t done: “Marco, the thing is this…the memorized 30-second speech when you talk about how great America is at the end of it doesn’t solve one problem for one person,” adding that being a senator “does not prepare you for president of the United States.”

Rubio’s response, which drew immediate boos, was to criticize Christie for initially not wanting to return to New Jersey after that state’s recent snow storm. And then, like the impending train wreck that somehow you knew was coming even though the engineer should have seen the obstacle on the track, Marco returned to this: “This notion that Barack Obama doesn’t know what he’s doing is just not true. He knows exactly what he’s doing.”

As the audience squirmed uncomfortably witnessing Rubio’s implosion, Christie retorted, “There it is…the memorized 25-second speech. There it is.” Marco, who seemed (as my wife put it) like a computer with a glitch that just kept replaying a recorded sound bite, kept rambling on about Obama, eliciting boos from the crowd.

The two then got further into a cat fight about whether Christie had to be “shamed into going back” to New Jersey. Christie won that battle too, with Rubio looking petty and unprepared and Christie asking “is now one the skills you get as a United States senator ESP also?” adding with effective snark that Rubio “gets very unruly when he gets off his talking points.”

In less than five minutes, Rubio had replayed a scripted high-minded irrelevancy three times, even after he was called out by Christie when he first tried to use it to evade a question about himself. Indeed, diversion was the purpose each time he attempted to turn the conversation to President Obama — and each time it failed.

To be fair, most of the rest of the debate was better for Rubio, although he also dodged a question about whether he had “cut and run” from his own immigration legislation and was again called on it by Chris Christie. If you missed the first part of the debate, you’d have thought Rubio’s night was acceptable if not stellar.

But well before then the die was cast: Marco Rubio had taken arguably the most important debate of his career and instead of using it to cement his position as the leading alternative to Donald Trump and Ted Cruz he proved accurate Chris Christie’s recent criticisms of him as being the “boy in the bubble.”

Rubio showed the effects of a candidate so effectively shielded by his handlers from hard questions and so over-prepared and scripted that he was unable to adjust to a debate that did not unfold as he had expected. On Saturday night, there was not a moment of spontaneity to be heard from Marco Rubio. Christie could easily have used one of my favorite lines: Thank you for being my point.

If Chris Christie hadn’t done so much damage to Marco Rubio, you might have said that Jeb Bush won his second debate in a row. His answers were solid and he again dispelled the “low energy” moniker laid on him by Donald Trump early in campaign season. He came across as even-keeled, principled, and experienced.

John Kasich got less time than the other governors but consistently exuded a positivity that was largely missing from the rest of the debate participants, smiling more than usual, and talking about how much fun he was having in his non-stop town hall meetings with the people of New Hampshire. He answers on policy questions were also sound, though not particularly different from several of his competitors.

Overall, each of the governors — Chris Christie, Jeb Bush, and John Kasich — had a good night, both because their own performances were solid and because Marco Rubio, their main immediate competitor, had such a dramatic collapse.

Donald Trump’s performance was mixed, with some good answers to serious policy questions but also getting trounced on eminent domain after which he received repeated boos from the crowd for insulting Jeb Bush and telling him to be quiet. Trump, in his usual petulant “I’m not saying, I’m just saying” style, muttered “Jeb wants to be tough guy” to which Jeb effectively retorted “How tough is it to take the property from an elderly woman?” Trump reacted to the ensuing boos by complaining that “donors” and Jeb’s “special interests” had received nearly all of the tickets to be in the debate audience, prompting more audience displeasure.