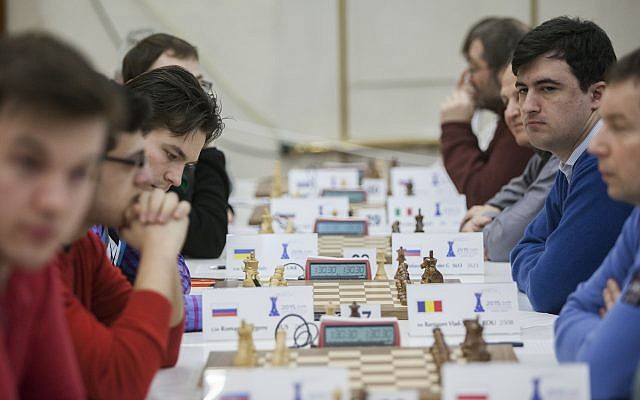 Israeli chess players on Sunday were denied the visas necessary for them to participate in an international tournament in Saudi Arabia next week, crushing hopes that they could make history by being the first representatives of the Jewish state to take part in such an event hosted by the kingdom.

Seven Israeli players had filed requests for visas to participate in the games to be held in Riyadh on December 26-30 as part of the world rapid and blitz chess championships.

Last month, the World Chess Federation (FIDE), which runs the tournament, said that it was “making a huge effort to assure that all players get their visas.”

But on Sunday that international body announced that its efforts were for naught.

Moshe Shalev, the interim head of the Israel Chess Federation, told The Times of Israel that the players had not been granted visas and said his group was discussing taking legal action.

“We are thinking about suing the World Chess Federation,” he said.

The federation’s vice president, Israel Gelfer, earlier told the Reuters news service that visas for the seven Israeli players “have not been issued and will not be issued.”

Israel and Saudi Arabia have no official relations. The public presence of Israelis there would be highly unusual, and would come as officials from the Jewish state increasingly hint at covert ties with the Sunni-ruled kingdom.

Israel and Saudi Arabia share a common fear of Iran’s attempts to increase its influence in the region.

Last month, the Israel Chess Federation said it “supports FIDE’s policy to hold the tournament in Saudi alongside FIDE’s commitment to ensure the participation of Israelis would not be subject to limitations,” spokesman Lior Aizenberg told AFP.

“We expect the Saudis, aided by FIDE, to approve our requests for visas to play,” he said.

Aizenberg noted the Israeli chess federation chairman Zvika Barkai had discussed the issue of the Saudi visas with Makropoulos as well as with FIDE President Kirsan Ilyumzhinov, who recently visited Israel.

A spokesman for the Foreign Ministry said the Israeli government wouldn’t have a problem were the players to participate in the Riyadh games if the visas were granted. (It is technically illegal for Israelis to travel to the kingdom, as it is considered an enemy country, though this is rarely enforced.)

Israeli athletes often face difficulties when competing in the Middle East or against Middle Eastern countries due to hostility toward their country.

In a recent incident, an Iranian wrestler was lauded by his government after he intentionally lost an international bout at a tournament in Poland over the weekend to avoid having to face an Israeli opponent.