The UN Human Rights Council displayed a display at their headquarters in Geneva last month that promoted the elimination of Israel. 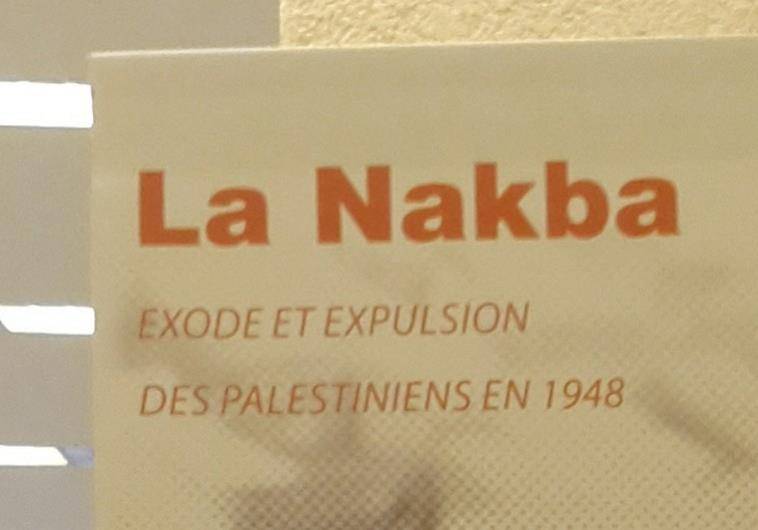 A shocking UN display promotes the elimination of Israel.

Incitement against the Jewish state is directly related to the stabbings, raping and killing of Jews inside and outside of Israel. But doing something to stop it requires confronting a very troubling fact: the global epicenter for incitement is the “human rights” leviathan, the United Nations.

From November 24, 2014 until December 5, 2014, UN human rights headquarters in Geneva mounted a public exhibit that was pure incitement. UN-driven antisemitism that takes the form of seeking to demonize, disable and ultimately destroy the Jewish state.

The exhibit was entitled: “La Nakba: Exode et Expulsion des Palestiniens en 1948” – or “The Nakba: Exodus and Expulsion of the [so-called] Palestinians in 1948.” The occasion was the annual UN Day of Solidarity with the Palestinian People. Solidarity Day marks the adoption by the General Assembly on November 29, 1947 of the resolution that approved the partitioning of Palestine into an Arab and a Jewish state.

The partition resolution was rejected by Arab states and celebrated by the Jewish people. Thus the Arab war to deny Israel’s right to exist began.

But in 2014, the UN overtly jettisoned the usual diplomatic lie that the 1967 occupation is the root cause of the Arab-Israeli conflict. The exhibit focused on the alleged crime of creating a Jewish state in 1948 and openly justified the rejection of the partition resolution.

The display was located in the UN’s Palais des Nations just outside the home room of the UN Human Rights Council. It consisted of 13 panels in French and an accompanying catalogue with English reproductions of each item. The catalogue was distributed by UN conference services.