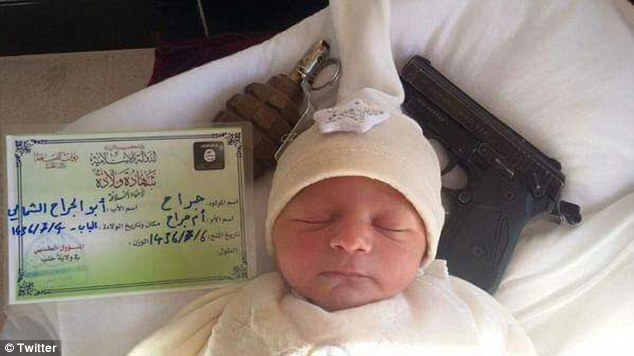 A sickening image linked to the Islamic State terrorist group has surfaced showing a newborn baby sleeping next to a grenade, a handgun and what appears to be a birth certificate.

The image, which has not been verified, was re-posted by anti-ISIS activists in Syria with the warning: ‘This child will be risk to you not just to us’.

Posted to Twitter on Sunday by Abu Ward Al-Raqqawi, the group claims the chilling snapshot was originally taken by the terror organization to [indoctrinate] the next generation of jihadis.

It also claims the certificate next to the baby is an ‘ISIS issued ID for a child.’

The image was believed to be posted by Abu Ward Al-Raqqawi in the hope of garnering attention to the international threat posed by ISIS.