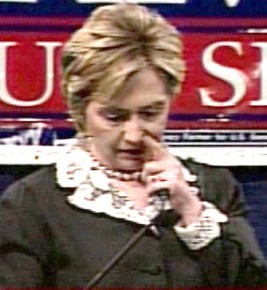 A recent article in The Economist, in stating that Hillary Clinton starts as the favorite to win the 2016 presidential election, posed the question: What does she stand for? To which the author answered:

Competence and experience, say her supporters. As secretary of state, she flew nearly a million miles and visited 112 countries. If a foreign crisis occurs on her watch, there is a good chance she will already have been there, read the briefing book and had tea with the local power brokers. No other candidate of either party can boast as much.

Chris Cillizza, in his column published earlier today in the Washington Post, wrote this:

There is little doubt among the electorate — with the exception of conservative Republicans who will never vote for Clinton under any circumstances — that her life experiences and résumé have prepared her to do the job. First lady, senator from New York, secretary of state — no one in the field (on either side) can match those credentials.

Clinton is universally known and, generally, regarded as hyper-competent. That’s her as her best asset.

That judgment, like the one in The Economist, strikes me as baseless. Not only is Mrs. Clinton not “hyper-competent,” she is not even minimally competent.

What exactly are her brilliant achievements? Is it HillaryCare, a substantive disaster that led to a political disaster (the Republican sweep in the 1994 mid-term election)? The multiple ethical problems she’s encountered during her years in politics? Here fierce opposition to the Petraeus-led surge in Iraq long after it was obvious it was succeeding? Perhaps the Russian reset? Referring to Bashar Assad, the genocidal dictator of Syria, as a “reformer“? Or maybe her masterful handling of the Iranian Green Revolution, relations with Egypt, Libya, Israel, the attack on the American diplomatic outpost in Benghazi, Poland, the Czech Republic, the “pivot” to Asia and countless other failures during the first Obama term?

What exactly are her achievements – her concrete, tangible, exceptional achievements – as First Lady, senator, and secretary of state? They don’t exist. In fact, the things she has her fingerprints on have, much more often than not, turned into disasters. The case that her supporters put forward on her behalf — she has flown nearly a million miles, visited more than 100 countries, read briefing books (!) and had tea with local power brokers (!!) – highlights just how pathetic her achievements are.

The media meme that Mrs. Clinton is “competent” – nay, “hyper-competent” – is silly. During the quarter-century she’s been on the national stage, she has proved herself to be an individual of extraordinary ambition, a conspiracy theorist, ethically challenged, and a key figure in a brutal political machine. She is also, pace The Economist and Chris Cillizza, unusually inept. This judgment is not an opinion; it is based on a reasonable assessment of her actual record. Including her briefing book reading habits and tea times.