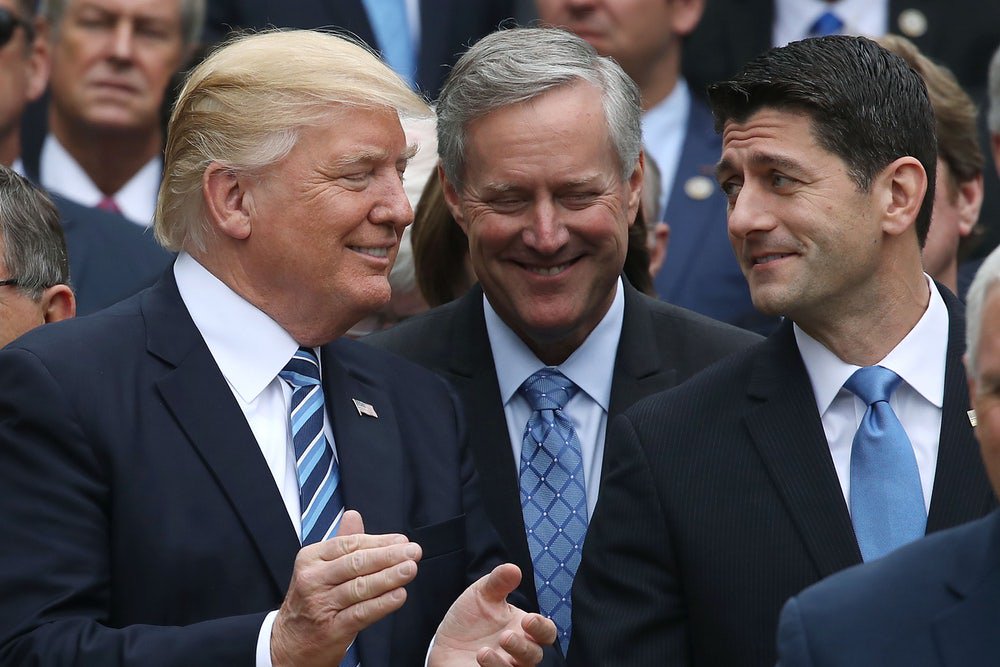 About 30 percent of those earning between $50,000 and $150,000 would pay more under the Republican plan, according to the nonpartisan Tax Policy Center.

The top 1 percent of income earners would be the biggest winners under Republicans’ plans to rewrite the tax code, according to a new analysis, while some moderate-income people would face tax increases.

For middle-income earners who would get a tax cut, it would pale in comparison to what the wealthy would get. On average, those in the top 1 percent would see a tax cut of $207,000 while those in the center of the income spectrum would receive on average a $420 tax cut, the report found.

The proposal released this week by the “Big Six” congressional and White House negotiators would cost $2.4 trillion over the next decade, the group said. It also found the plan, in aggregate, would raise taxes on individual taxpayers while cutting them for businesses — a politically perilous combination for lawmakers.

The assessment — which included a number of assumptions about how the GOP plan would work — undercuts Republicans’ assertions that their plan is focusing on helping the middle class, not the well-to-do, and hands Democratic critics reams of ammunition.

While the administration says the rich would not see their taxes go down, the Tax Policy Center says they would actually receive the biggest tax cuts — about half of all the benefits, with their after-tax incomes climbing by 8.5 percent.

Mark Mazur, head of the group, pointed to GOP plans to eliminate the estate tax and alternative minimum tax, as well its plans to cut the top income tax rate and the levy on so-called pass-through businesses, which pay taxes through the individual tax code.

That’s mostly because Republicans want to replace the personal exemption, which is designed to adjust tax burdens for family size and is adjusted for inflation, with a beefed-up child tax credit that does not take account of inflation, and also because they want to junk most itemized deductions.

The report comes one day after National Economic Council Director Gary Cohn said “the wealthy are not getting a tax cut under our plan,” and Treasury Secretary Steven Mnuchin said the plan would generate so much economic activity that it would pay for itself.

They are two of the Big Six Republican leaders who on Wednesday released a long-anticipated framework for rewriting the tax code. It called for slashing the corporate rate to 20 percent, from 35 percent, while cutting taxes on unincorporated pass-through businesses to 25 percent. They also called for doubling the standard deduction and increasing a popular child tax credit, among many other changes.

The analysis comes even as Republicans rewrote their plan to avoid giving so much to the wealthy.

Though they had campaigned last year on steep tax cuts for the highest earners, Republicans tried to reverse course — in order to head off Democratic attacks — by scuttling plans to cut the capital gains tax, while floating the idea of a surtax on the rich.

Earlier this week, a senior administration official told reporters: “We are committed to making sure the tax code is at least as progressive as the existing tax code, that it does not shift the tax burden from high-income to low- and middle-income taxpayers.”

The Tax Policy Center said Republicans could conceivably offset the tax cuts for the wealthy with a proposal to create a new, higher income tax bracket on the rich, but because they did not include any details on how it might work or if it definitely is part of Republicans’ plans, the group did not include it in their analysis.

Those earning between $150,000 and $300,000 would pay an average of $800 more, the analysis found. That’s in part because they wouldn’t benefit from the proposal to expand the standard deduction and yet would lose itemized deductions like a long-standing break for state and local taxes.

The number of taxpayers who’d pay more under the plan would grow with time, TPC said.

Overall, the plan would cut taxes for businesses by $2.6 trillion over the next decade. Killing the estate tax and gift taxes would cost another $240 billion. The changes to the individual side of the code would raise taxes by $470 billion.

That’s sure to give some lawmakers pause. Historically, Congress has packaged tax cuts for businesses with much larger ones for individuals.

Republicans omitted many of the specifics of how the plan would work, including things like where the different income tax brackets would kick in and by how much they want to increase the child tax deduction. Republicans plan to increase the total size of the break, as well as loosen its eligibility rules, but said those details would be sorted out by congressional tax-writing committees.

So the Tax Policy Center made various assumptions about how the plan would work. It assumed the maximum child tax credit would grow to $1,500 from the current $1,000, and that the individual income tax brackets would begin at the same levels as House Republicans proposed in their tax-reform “blueprint” unveiled last year.

The report did not include a so-called dynamic analysis, assessing how the Republican plan would affect the economy. That will be ready in about a week, the group said, while adding, “We would expect the framework to have little macroeconomic feedback effect on revenues over the first decade.”