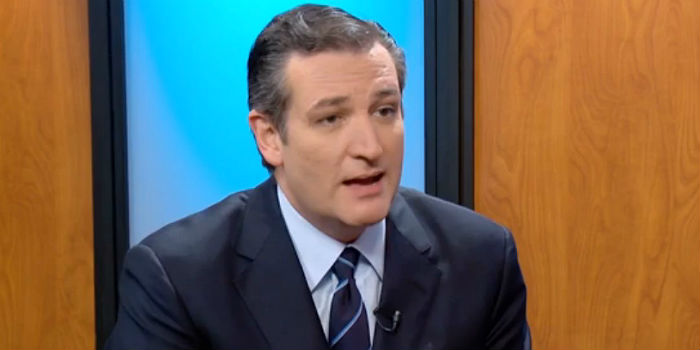 “On Thursday of last week the court rewrote Obamacare, rewrote the statute, ignored the language of the statute and as a result forced millions of people into this failed law,” the Texas Republican, a presidential candidate, told NBC’s “Today” correspondent Savannah Guthrie. “The next day, the Supreme Court rewrote the Constitution and threw out the marriage laws of all 50 states.”

There is a constitutional means for changing marriage laws, said Cruz, and instead of a Supreme Court ruling, “the way the Constitution allows you to do so is to convince your fellow citizens through the democratic process.”

Instead, he continued, “five unelected lawyers [said] the views of 320 million Americans don’t matter, because they’re going to enforce their own policy position.”

But he rejected a question from Guthrie over whether he’d support the refusal of a marriage license to an interracial couple, as some argue, pointing to similarities between last week’s gay marriage ruling and the landmark Loving vs. Virginia case of 1967, which invalidated laws prohibiting interracial marriages.

“There’s no religious backing for that,” said Cruz. “I have spent decades fighting against bigotry and racial oppression; I’m the son of a Cuban immigrant.”

Further, he pointed out that the Civil War was fought over the “original sin of our country, which was slavery.”

“Slavery was grotesque and immoral and some 600,000 Americans spilled their blood on American soil and lost their lives to expunge it,” he said. “We passed the 13th, 14th and 15th amendments to the Constitution that are to ensure that everyone has equal rights regardless of race.

“And that was honoring the promise of the Constitution. It was the right thing to do.”

Cruz has suggested a constitutional amendment that would subject Supreme Court justices to retention elections, and told Guthrie that the court has “injected itself into politics.”

“You’ve got nine lawyers, they’re all from Harvard or Yale,” said Cruz. “There are no Protestants on the court, there are no evangelicals on the court. The elites on the court look over much of this country” as “fly-over” territory.

Further, said Cruz, “they think our views are parochial and don’t deserve to be affected. Justice [Antonin] Scalia pointed out, what a crazy system to have the most important issues of our day decided by unelected lawyers.”