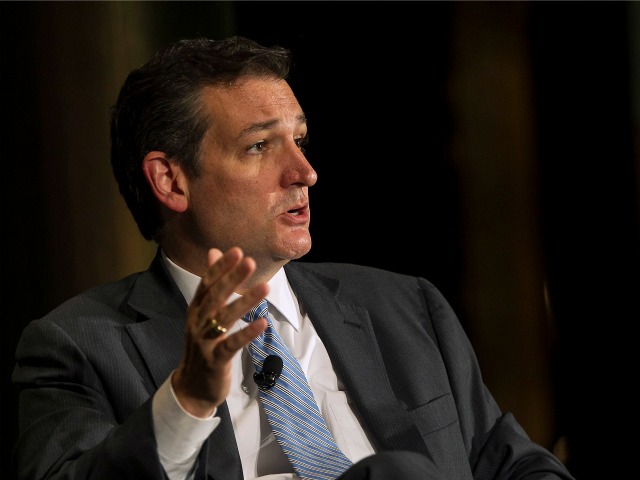 Presidential candidate Ted Cruz laid out a strategy to “build a wall” along the United States border as a paramount portion of his plan to solve illegal immigration.

During Saturday night’s Republican Presidential debate in New Hampshire he added, referring to Donald Trump, “I’ve got somebody in mind to build it.”

Moderator David Muir asked Cruz about his immigration plan and how he would deal with “11.5 million undocumented people.”

So, in terms of a practical solution, I’ve laid out the most detailed plan for solving illegal immigration. It’s 11 pages, single-spaced, chapter and verse. It’s on our website, tedcruz.org.

We’re going to increase four-fold, the fixed-wing and rotary-wing aircraft, so that you have technology monitoring an attempted incursion to direct the boots on the ground where they’re occurring. We’re going to put in place a strong e-verify system in the workplace, so you can’t get a job without proving you are here legally.

We’ll put in place a biometric exit-entry system on visas, because 40 percent of illegal immigration comes not over the border illegally, but people coming on visas and overstaying.

We will end sanctuary cities by cutting off taxpayer dollars to any jurisdiction that defies federal immigration law.

After audience applause Cruz added, “And we will end welfare benefits for those here illegally.”

Muir tried to push Cruz asking how he would deal with those families in the U.S. illegally.

What you do is, you enforce the law. You know, under the Constitution, the president has an obligation to, quote, “Take care that the laws be faithfully executed.” Federal immigration law provides, if someone is here illegally and is apprehended, they are to be deported.

We saw just this past week the head of the border patrol union testify before Congress that President Obama had given the order to the border patrol to stand down, not to enforce the law. That is wrong. I will enforce the law, and for everyone who says, you can’t possibly do that, I would note that in eight years, Bill Clinton deported 12 million people.

In eight years, George W. Bush deported 10 million people. Enforcing the law — we can do it. What is missing is the political will. And when they were deporting the people, the border wasn’t secure, so they’d come right back. Once you secure the border, enforcing the law will solve this problem and that will benefit American workers.

The three main points of the Cruz Immigration plan are:

• First, secure the border, once and for all. No other reform is meaningful if we do not fix our porous southern border.

• Second, strengthen and enforce our existing immigration laws. We must reverse President Obama’s enforcement “priorities,” which allow a large number of criminal aliens to unlawfully remain in the United States.

• Third, pursue reforms to the legal-immigration system that will prioritize the interests and well-being of Americans. As a nation built by those fleeing persecution and seeking freedom, we must once against welcome and celebrate legal immigrants while at the same time protecting American jobs and interests.

Cruz’s full Immigration Plan can be found on tedcruz.org.