Since 2014, the Border Police have become a favorite target for Arab terrorists. 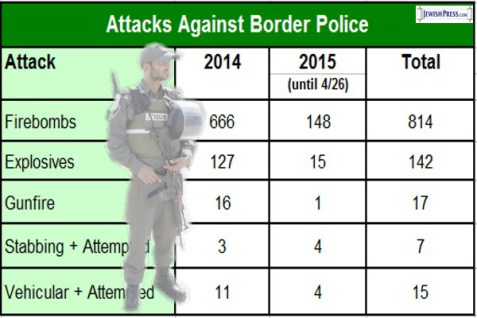 2014 and 2015 witnessed an unusually large number of terror attacks directed at Border Policemen and Policewomen, as well as police SWAT and undercover units.

According to a new Walla! report, there were 995 attacks during this period. 70% of these attacks happened during “peacetime” periods, while 30% happened during Operation Protective Edge.

The Border Police, nicknamed “Magav” in Hebrew which is short for “Mishmar HaGvul”, are officially a division of the police department, but they started off as an IDF unit in 1949, protecting and policing the frontier. IDF conscripts can elect to serve in the Border Police for their army service.

Border Policemen primarily work in Jerusalem, and in front-line friction locations in Judea and Samaria. They work together with both regular police officers and IDF soldiers.

Their deployment locations account for why they are easily accessible targets, though not why there have been so many attacks.

Border Police commander Amos Jacob said in response to the disconcerting data, that the large number of terror incidents against the Magav, shows that the Border Police are at the forefront of protecting Israeli citizens and saving lives from terror attacks.