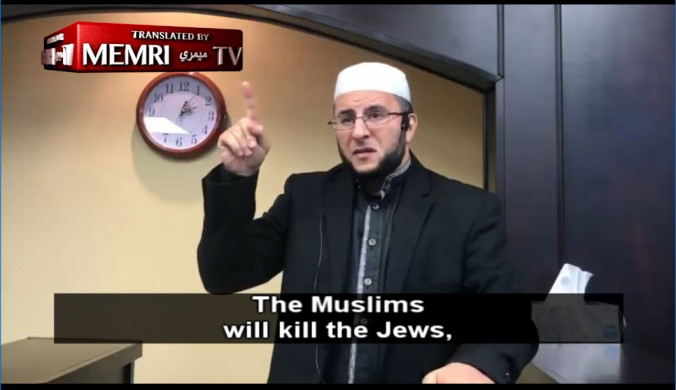 More mass murder and Nazi Jew hatred from the “religion of peace”.

In his Friday, December 8, 2017 sermon titled “Our Duties Towards Al-Quds [Jerusalem]” at the Tajweed Institute’s Houston, Texas branch, the institute’s imam and founder, Sheikh Raed Saleh Al-Rousan, speaking in a combination of Arabic and English, referenced the widely quoted Hadith stating that on Judgment Day, the Muslims will fight the Jews and kill them, saying:

“My brothers, the Prophet Muhammad brought the good tidings, when he said: ‘Judgment day will not come until the Muslims fight the Jews. The Muslims will kill the Jews, and the Jews will hide behind the stones and the trees, [which] will say: Oh Muslim, oh servant of Allah, there is a Jew hiding behind me, come and kill him… This is the promise of Allah.” He added: “The hour [i.e. Judgment Day) will not start until Muslims fight the Jews there, in Palestine.”

The video of the sermon was posted by the Tajweed Institute on its Facebook and YouTube accounts.[1]

According to its Facebook page and its website,[2] the Tajweed Institute, which Sheikh Al-Rousan established in Florida in 2013, with its Houston branch opening in mid-2017,[3] is “a  non-profit, 501(c)(3), institute that strives to teach and spread the authentic knowledge of the Glorious Quran. Our goal is to spread the skills of Tajweed [correct recitation of the Koran]to all Muslims, young and old, so they can carry on this knowledge to future generations.​“[4]

Sheikh Al-Rousan, who according to the Facebook page was born in Jordan, has a Bachelors degree in Islamic Hadith from the Islamic University of Al-Madina, Saudi Arabia,[5] and, after arriving in the U.S. in 2007, earned a Masters in Islamic Studies from the Graduate Theological Foundation in Indiana. He has served as imam in mosques in Jordan and the U.S., including at Masjid Al-Qassam in Tampa, FL and Ebad AlRahman in Saint Petersburg, FL. Several YouTube videos, in both Arabic and English, show him teaching Quran recitation at various venues.[6] He has also led a Hifdh (Quran memorization) program for grades 4-9 at the American Youth Academy in Tampa.[7]

The Tajweed Institute Facebook page shows that Sheikh Al-Rousan teaches courses on Quran recitation and leads other events, for example, a February 5, 2016 fundraising event for the Austin Peace Academy,[8] an event at the Islamic Society of Arlington, Texas,[9] a November 11, 2016 Night of Quran Recitation at the Masjid As-Salam in Houston,[10] an April 155, 2016 event titled “The Successful Marriage” at the North Austin Muslim Community Center,[11] and a pre-Ramadan course at the River Oaks Islamic Center in Houston.

The following is the MEMRI TV clip and transcript of Sheikh Al-Rousan’s December 8, 2018 statements: