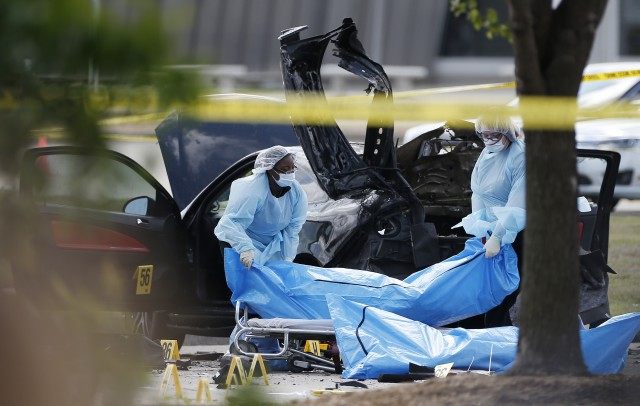 A Texas traffic cop saved untold lives Sunday night when he took down two heavily armed men bent on storming a building where a ‘Draw the Prophet’ Muhammad contest was taking place, killing both before they could make their way inside.

The police officer, who has not been identified by Garland Police Department officials, “probably saved lives,” said police spokesman Joe Harn, who added that “his reaction, and his shooting with a pistol, he did a good job.”

Harn said the two suspects, believed to have driven some 1,100 miles from Phoenix to invade the contest at a suburban Dallas venue, shot assault rifles outside, wounding a security guard and hitting at least one police car. Local police, a SWAT team, FBI and ATF agents were on hand for the event, attended by 75 people, which authorities anticipated could anger Muslim hardliners. Authorities in Garland said the men — wearing body armor — drove up to the Curtis Culwell Center on Sunday night and began shooting at a security officer with assault rifles.

Two tweets apparently sent out prior to the shooting from two social media accounts linked to radical Islam seemed to foreshadow the attack. One, sent at 6:35 p.m., some 15 minutes before the attack, used the hashtag #texasattack. “May Allah accept us as mujahideen,” it said.

But it was the unidentified Garland police officer, who spends most of his shift assigned to traffic duty, who killed both suspects, who were each dead at the scene.