Raz Nizri, a kippah-wearing Jew, lied about the torture of Jewish youth accused in the Duma incident. Does the kippah on his head mean anything to him? 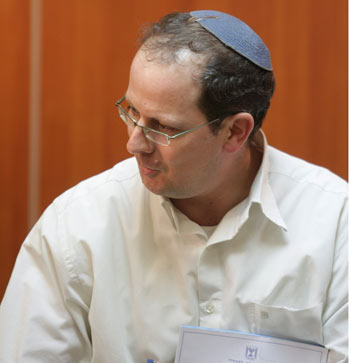 Initial documents released as part of discovery in the case against Amiram Ben Uliel and E., a minor charged as an accomplice in the Duma attack, contained an affidavit from Liana Magad. She is a lead prosecutor in the Central Region and accompanied Raz Nizri, the Deputy Attorney General, in his visit to the suspects to assess the torture allegations.

Despite the fact that Nizri claimed to Israeli media that there were no signs of torture, Magad’s affidavit reported that E. complained of being tortured. She wrote, “They beat him during the interrogation, pulled his head backwards and only after he later complained to the judge did they stop. They pulled his arms backwards and raised them up causing him a tremendous burning feeling that he says was unbearable.” Amiram Ben Uliel told her that he was bent backwards such that his body formed a circle.

While in many photos it is not clear, Nizri in fact wears a kippah and lives in a religious neighborhood. It seems that as he has advanced through the ranks, his kippah has gotten smaller and smaller, but it still remains on his head. He is now among the most senior officials in the justice ministry who is ‘religious.’ In many religious circles, Jews celebrate at the fact that ‘one of our own’ was appointed to such a senior position and has advanced so far. Surely this shows that Israel is becoming more religious and that religious Jews are making serious advances.

But is that really true? Is Nizri really ‘religious’? Does his kippah mean anything to him?

A kippah is not just a symbol showing that a Jew only eats certain food or only drives his car on certain days. A kippah is about a Jew recognizing that G-d is always him and that every decision a Jew makes makes must be governed by that reality. Nizri is not stupid and he is fully aware that Judaism forbids torturing a fellow Jew. Yet he also knows that he didn’t get to his position in order to recognize such things.

The leftist Court System and Justice Ministry in Israel is fine with having Nizri and his ever-disappearing kippah as Deputy Attorney General so long as that kippah has no effect on his decisions. Yet if the kippah does not impact how he does his job, then why does it matter to so many religious Jews? Why are we religious Jews so proud when we see a ‘Nizri’ as Deputy Attorney General?

In truth, there is nothing to be proud of. Nizri’s kippah does not make what he did any more kosher than they before. If Yariv Oppenheimer suddenly put on a kippah, but kept on doing what he does, that wouldn’t make his actions any better than before.

If anything Nizri’s kippah makes his actions all the more despicable. It makes his actions a Chillul Hashem, a desecration of G-d’s name. Think of all the secular Jews who hear Nizri lie and permit torturing Jews. They will think that Judaism allows for such things.

Think of all the non-Jews who saw Nizri approve torture of Jews and then cover it up. How quickly will they jump up next time they’re accused of anti-Semitism and use Nizri as their defense?

Nizri is the shame of the kippah-wearing public, not its pride. It’s time we come together and make it clear to Nizri that a kippah is more than just a piece of headgear. It’s a reminder that G-d is always watching us and all the more so when we speak to media or act as part of a public role.

Next Saturday night (Feb. 13th) there is a protest outside Raz Nizri’s house at 49 HaNasi St. in Givat Shmuel at 8:30PM. I’ll be there wearing my kippah, because my kippah forces me to protest the oppression of a fellow Jew. Maybe after the protest Nizri’s kippah will finally mean something to him too…