Trump has time to devote to his ego-driven obsession with negative news coverage on Twitter but not to educate himself on the day-to-day duties of the office he holds.

Not content to limit his state of his juvenescence on Twitter to bickering with Joe Scarborough and Mika Brzenzski, Donald Trump tweeted a video showing “beating” on a logo of CNN.

You read that correctly. The video superimposed the logo of CNN over the head of WWE Chairman Vince McMahon in a scene cut from Wrestlemania (insert whatever Roman numeral it is) when Trump launched a sneak “attack” on McMahon and pummeled him while he was down.

The tweet is everything many of us expect from the President. The tweet is trollish, juvenile, unbecoming a man of his office and just flat-out dumb. It wasn’t even funny.

It was not, however, an invitation for violence. Plenty of people seem to think so including CNN:

CNN statement responding to the president: “We will keep doing our jobs. He should start doing his.” pic.twitter.com/Gn1YRA2DRG

Trump doesn’t think on the level of encouraging violence through something such as that tweet. Trump thinks of everything in how it affects his little personal universe. Having lived in NY/NJ for nearly 30 years, anybody can tell you, Donald Trump loved seeing his name on Page Six of the New York Post more than anything else. We’re talking about a man who made up people (John Miller or John Barron) to act as a publicist for himself with New York-based reporters, particularly those from the Post and Daily News.

To him, the WWE/CNN tweet was more a reminder of how somebody remembered him being center stage at Wrestlemania one year than it was something he thinks encourages violence against reporters. Remember, professional wrestling is fake, and it’s a CNN logo, not a person. I find it ironic that many in the media who went out of their way to say congressional baseball shooter James Hodgkinson didn’t act on behalf of rhetoric espoused by Democrats and Bernie Sanders, in particular, are claiming the President’s tweet is “dangerous” in that it incites violence.

There is a concern about his tweeting but goes to his role as president.  It’s Independence Day weekend, and the President is still so consumed with his bickering mentality with the media that he can’t stop for a day. He has time to devote to his obsession with negative news coverage but not to educate himself on the day-to-day duties of the office he holds. 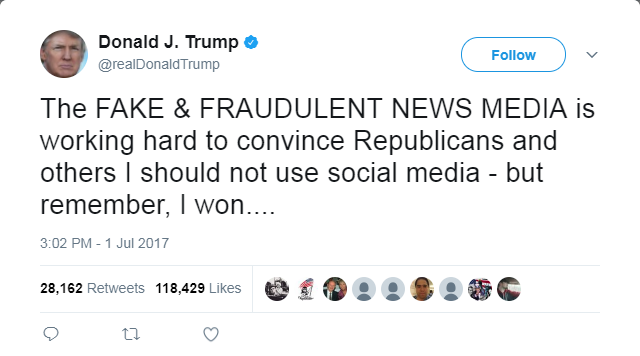 What’s worse is the large group of Republican and conservative legislators and activists who defend him and his antics simply because of their hatred for the mainstream media. It doesn’t seem to concern them that President Trump’s first order of business each morning is to watch morning news shows and then hate-tweet any criticism.

They excuse it with responses such as, “He’s just fighting back! Why isn’t he allowed to do that to people like Joe and Mika who say negative things about him every day?” Such questions ignore the reality of people in the press being negative towards the president no matter the party. It comes with the territory. If he cannot handle criticism from a show watched by 0.3 percent of the population (Morning Joe) then how are we supposed to have confidence in his ability to run the country?

It’s fair to say his obsession with CNN and MSNBC is impairing his ability to reason when I read he’s ignoring the advice of people in his cabinet and is preparing to engage in a trade war that will hurt our nation’s economy.

Trump’s tweet about CNN is not an incitement to violence, but it is also troubling. His inability to understand the importance of his office for the sake of petty fights is detrimental to the country. He’s not going to change and that doesn’t bode well for the republic.