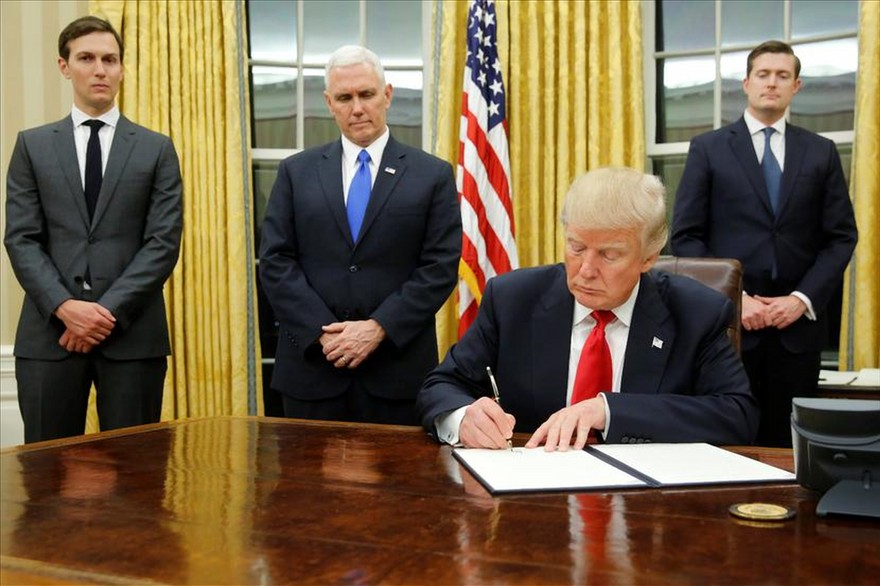 On his first day in office, Donald Trump, who is on pace to make it into the Guinness Book of World Records for signing more executive orders than any president in the last 50 years, began his record-breaking streak by signing the “Executive Order Minimizing the Economic Burden of the Patient Protection and Affordable Care Act (Obamacare) Pending Repeal.”

While the Trump chorus line sang the praises of the NY liberal for apparently getting the ball rolling with Obamacare repeal, his order was little more than window dressing designed to provide Trump with a photo-op where he could appear to be doing something while essentially doing nothing.

Candidate Trump had no plan for dealing with the Obamacare disaster other than a commitment to move the country towards a single-payer government-run system. As a result, President Trump would take every side of the issue as first the House and then the Senate attempted to pass a fake-repeal of Obamacare. In the end, Trump opted to go the “pen and phone” route used by Obama to issue more executive orders.

Since Congress can’t get its act together on HealthCare, I will be using the power of the pen to give great HealthCare to many people – FAST

One of Trump’s recent orders was issued to bring an end to Obamacare subsidies to insurance companies—an easy call since the payments had been deemed unconstitutional by a federal judge last year. In response to the order, Sens. Lamar Alexander (R-TN) and Patty Murray (D-WA) went to work creating a bill that would restore the subsidies. While Trump originally favored their efforts, he changed his mind after taking heat for helping to save Obamacare.

In the ultimate admission that his actions concerning Obamacare have been insufficient, Trump flipped again and now supports the Alexander/Murray bill, so long as they add a provision granting retroactive relief from penalties owed by individuals and employers without Obamacare.

Didn’t Trump get rid of that penalty on his first day in office? I’m afraid not.

Apparently, Trump’s Jan. 20 executive order only provided relief from the “economic burden” of paying the fee for not having insurance—or as Chief Justice John Roberts called it, a tax—for returns filed on Tax Day 2017. This means that next year, for the first time, the IRS will reject tax returns that fail to provide proof of insurance, subjecting them to the mandate tax.

Trump’s use of constitutionally questionable executive orders, along with backroom deals between RINOs and Chuck Schumer–he fully supports the Alexander/Murray bill–guarantees that Obamacare and the destruction it brings to healthcare, not to mention our constitutional rights, will never die.