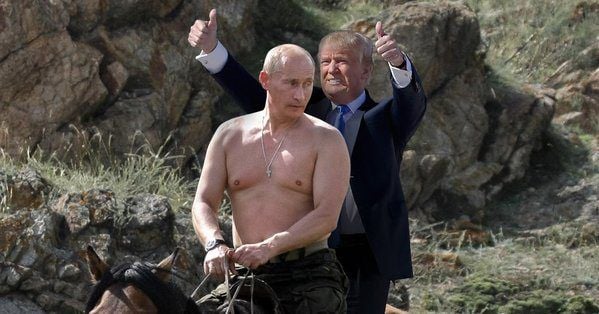 Donald Trump suggested on Wednesday that Russia to commit a cybercrime against Democratic presidential candidate Hillary Clinton, saying he hoped Russia would hack into Clinton’s private email server and recover some of her deleted emails.

“Russia, if you’re listening, I hope you’re able to find the 30,000 emails that are missing,” Trump said at a press conference in Doral, Florida, on Wednesday. “I think you will probably be rewarded mightily by our press. Let’s see if that happens.”

Trump also suggested Russia may already have the emails after a hack of Democratic National Committee files. The FBI announced on Monday that it is opening an investigation into the incident. “I hope they do,” Trump said of Russia having the emails, which could contain classified information. “You’d see some beauties in there.”

Clinton’s team put out a statement accusing Trump of encouraging “espionage.” The statement said, “This has to be the first time that a major presidential candidate has actively encouraged a foreign power to conduct espionage against his political opponent.

That’s not hyperbole, those are just the facts. This has gone from being a matter of curiosity, and a matter of politics, to being a national security issue.”

After the news conference, Trump campaign Senior Communications Adviser Jason Miller clarified that Trump wasn’t calling on anyone to intervene, but instead was pushing anyone who has them to hand them over to authorities.

Meanwhile, the former US first lady, New York senator and secretary of state will on Thursday night become the first woman to accept a major party’s nomination for president.

Her path to the Democratic nomination was not linear, and the party remains significantly divided between those in her camp and those loyal to Sen. Bernie Sanders of Vermont, her chief primary campaign rival. Sanders endorsed Clinton enthusiastically this week at the Democratic National Convention here, despite vocal pushback from his most ardent supporters.

Her success in breaking that “highest, hardest glass ceiling” – as she called the barrier after her failed bid for the nomination in 2008 – was cause for widespread celebration on the convention floor on Tuesday night, after Sanders formally placed her name forward by acclamation. Her nomination by the Democrats directly follows the party’s previous choice of putting forth America’s first black president, Barack Obama.

But as one of the least-liked candidates in modern American political history – she is seen unfavorably by roughly half of the country entering November’s contest – Clinton, who has faced public scrutiny for nearly 30 years, hopes this convention will recast her image once again as one of a compassionate figure interested more in societal good than in self-gain.

She may benefit electorally from running against a candidate – Republican presidential nominee Donald Trump – who has an even lower favorability rating than she has, but polling in key battleground states such as Florida, Pennsylvania and Ohio all show a race far closer than Democrats expected.

“Anything is possible,” Obama said on Thursday morning, when asked whether Trump has a chance of winning the presidency. Low voter turnout, the president said, may benefit the bombastic New York businessman, in similar ways that suppressed turnout among British youth contributed to the success of a campaign to pull the United Kingdom out of the European Union last month.

In a press conference in Florida, Trump said he would love to see a woman become president – just so long as Clinton is not that woman.

Electing the former secretary of state would simply continue the policies of Obama – who has been a “disaster for Israel,” Trump said.

Trump has found himself on the back foot after US intelligence figures said they had determined “with high confidence” that Russian state actors were behind a hack of the Democratic National Committee’s email system. A subsequent leak of 20,000 emails – just days before the party’s convention – appeared timed to politically benefit Trump, Russia’s favored candidate in the race.

The emails made clear that the committee repeatedly lied when it said it did not work to help Clinton defeat Sanders in the primaries. The party’s chairwoman, Rep. Debbie Wasserman Schultz, resigned on Sunday over the affair.

Trump insisted he has no investments in Russia. But he has reportedly relied on Russian and Kazakh money via the Bayrock Group, a real estate conglomerate, and both his campaign manager, Paul Manafort, and his chief Europe adviser, Carter Page, have worked in the orbit of Russian President Vladimir Putin for over a decade.

“Putin is eager to see Trump win, and that should worry every American,” former secretary of state Madeleine Albright told the Democratic convention on Tuesday night. “The fact is that he has already done that simply by running for president.

“Take it from someone who fled the Iron Curtain – I know what happens when you give the Russians a green light,” said Albright, who was born in Czechoslovakia.