El Trumpo once again showed that his policies will change from day to day depending on how schizophrenic the egomaniac feels at the time. Now he’s flip flopping on a minimum wage raise after saying wages are “too high” and that he would oppose any minimum wage raise.

He made the comments while speaking to Bill O’Reilly: 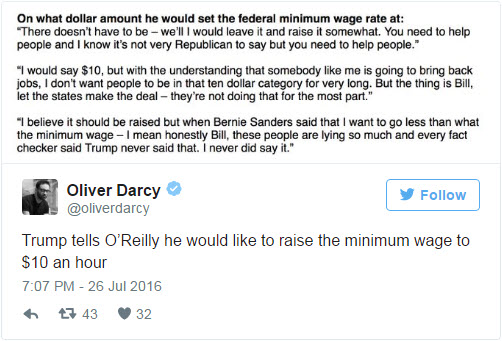 Don’t miss out on the fact that he says, “I know it’s not very Republican to say but you need to help people.”  I guess that’s what you get when you elect a liberal to the Republican ticket – he’s going to constantly attack us by using liberal talking points.

Isn’t the supposed genius businessman supposed to know how the economy runs? If he did, wouldn’t he have more certain and less pliable notions about how to fix it? I guess not….