Trump to Announce Amnesty Plan for Millions of Illegals 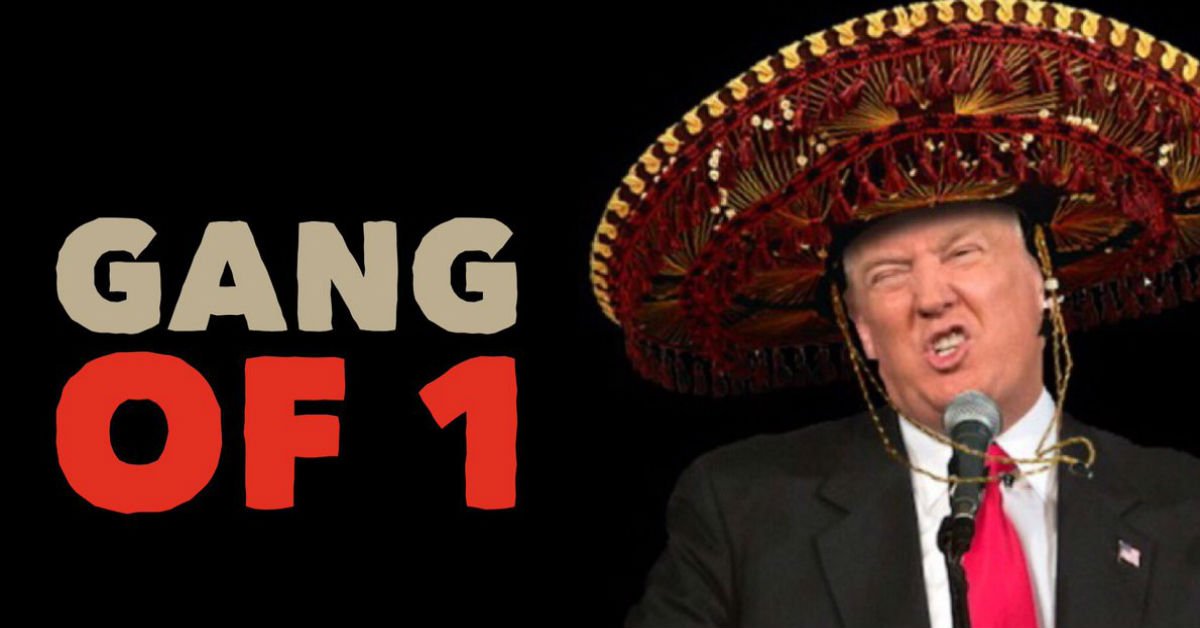 To say Donald Trump’s sycophantic supporters are loyal to a fault is a major understatement, and nothing — and I do mean nothing — has been able to break loose their hero worship of “Mr. Trump,” the liberal New York real estate tycoon and reality TV star who has managed to become the Republican nominee for president with an assist of millions of Democrats voting in GOP primaries.

Trump has tested his undying supporters with incendiary remark after ungodly personal smear of opponents, even taunting his worshipers that they would still bow to him, even if he literally stood in the middle of Fifth Avenue in New York and shot someone (there is zero doubt that this is true.).

Donald Trump may yet again be drawing a line in the sand with his foot, challenging his supporters to cross it and follow him, even after he reverses the cornerstone of his candidacy — stopping amnesty for illegal aliens.

In a Saturday meeting with his newly announced Hispanic advisory council, Donald Trump suggested he is interested in figuring out a “humane and efficient” manner to deal with immigrants in the country illegally, according to three sources. Trump, however, stressed that any new announcements will still be in line with the border security-focused approach that has invited intense opposition from Latinos and immigrants since he launched his campaign.

“He said people who are here is the toughest part of the immigration debate, that it must be something that respects border security but deals with this in a humane and efficient manner,” said Jacob Monty, a Houston-based immigration lawyer who sat in Trump Tower with other Latino supporters and Trump.

“The idea is we’re not getting someone in front of the line, we’re doing it in a legal way, but he wants to hear ideas of how we deal with 11 million people that are here with no documents,” said Jose Fuentes, who was chair of Mitt Romney’s Hispanic advisory committee in 2012, and attended the meeting.

So by “humane” does that mean no deportation? We shall soon see, hopefully, because we as voters deserve to know whether Trump has flip-flopped on another important issue.

Beyond that, and more important if true, is that Univision, a Spanish-speaking network that openly supports open borders and amnesty for illegal aliens, is reporting that Trump will announce a plan to grant legal status, i.e., amnesty, this coming week.

The question is, will avid Trump cheerleaders scream “Cuck! Globalist! RINO!” or will they continue to bend over and say, “Thank you, Mr. Trump, sir, may I have another, please?”

Yes, he’s not Hillary Clinton, but if this report turns out to be true, his immigration plan, which was always “touchback amnesty” anyway, just got much more liberal than primary opponents like, let’s say, Ted Cruz, and much more like pro-amnesty squishes like Jeb Bush and Marco Rubio.

Many people on Twitter mocked gullible Trump supporters for getting hoodwinked and duped into falling for the bloviating billionaire and narcissistic con man. 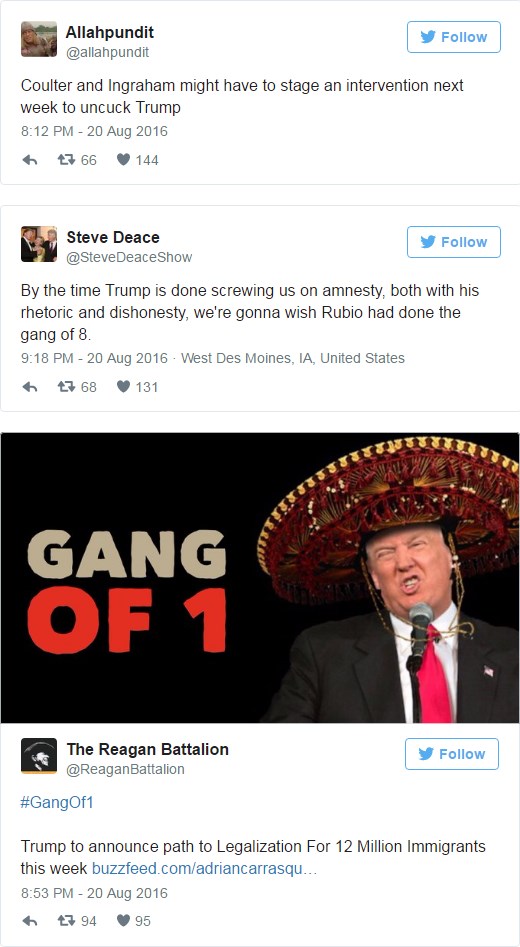 If Trump turns out to be the amnesty and even border squish we think he is (he’s the guy who saidRomney’s amnesty plan was too tough, too “mean-spirited” in 2012 and tweeted previously in favor of legalization of illegals in 2013), it wouldn’t be the first time.

In January, we reported that in August 2013, Donald Trump met with illegal immigration activists, the very same “DREAMers” he now claims to want to deport, telling them precisely the opposite, that, “You’ve convinced me.”

NBC Latino had the August 2013 report:

Real estate mogul Donald Trump met with immigrant advocates on Wednesday to discuss immigration reform and ended the meeting with a resolution to move the debate forward.

Trump met with youth immigrant leaders Jose Machado, Diego Sanchez and nationally renowned Dreamer Gaby Pacheco of The Bridge Project at Trump Towers in New York at the request of Antonio Tijerino, President and CEO of the Hispanic Heritage Foundation.

“He really listened and asked thoughtful questions,” said Machado of the meeting to discuss immigration reform. “We had the opportunity to share our stories and explain why millions of Americans from California, Colorado, Texas, Florida and New York (to name a few states) have come out to say, ‘We need to find a solution to our broken immigration system.’”

The Bridge Project aims to link the gap between political parties and connect Americans from across the political spectrum to advocate for immigration reform. The group is currently in the midst of a seven-state tour to gather support for reform.

And it seems the meeting was fruitful, shared Machado. Trump told the trio “You’ve convinced me.”

For what it’s worth, the Trump campaign’s spin on today’s above-mentioned meeting with amnesty proponents was that Trump’s views expressed at the meeting is nothing new: 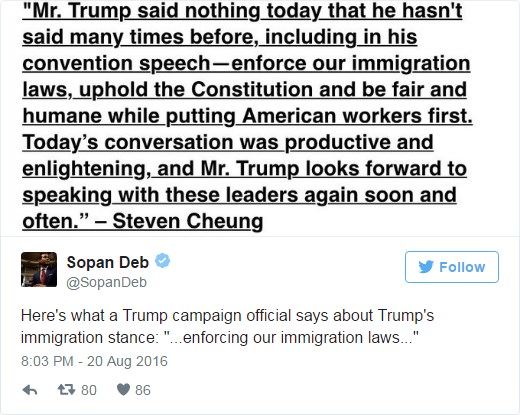 As if this election season needs any more drama, it will be highly entertaining to watch the reaction from the likes of Trump pom-pom girls and Trump cultists like Sean Hannity, Eric Bolling, Ann Coulter and even Breitbart (Trumpbart) News spin this one.

Marco Rubio’s credibility was greatly diminished by his involvement — leadership — in the “Gang of Eight” amnesty bill in 2013, and rightfully so.

But if Donald Trump turns out to be the “Gang of One” on amnesty, will his supporters care?