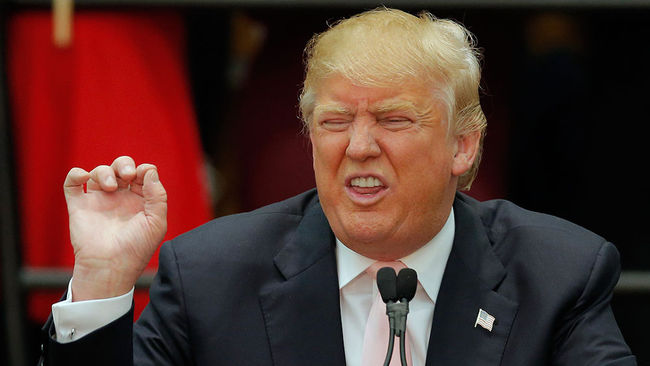 Donald Trump complained today that the United States has “lacked a coherent foreign policy” since the end of the Cold War. His vow that a Trump administration would impose coherence is about as credible as his vow to make Mexico pay for his fantasy wall. Indeed, the foreign-policy speech was itself incoherent . . . quite apart from the fact that, just the blink of an eye ago, Trump was enthusiastically supporting — with his tongue and his wallet — the very policies he now bemoans.

There is some validity in Trump’s 20–20 hindsight. In Libya, for example, based on policy spearheaded by then–secretary of state Hillary Clinton, the Obama administration switched sides in a jihad: toppling Moammar Qaddafi, whom our government was then funding and describing as a key counterterrorism ally. The beneficiaries of this shift were rabidly anti-American Islamists in Libya, including jihadist factions about which Qaddafi had been feeding us intelligence. As Senator Ted Cruz (whom I support) has repeatedly pointed out, the easily foreseeable result of the Clinton/Obama policy has been Libya’s transformation into a terrorist safe haven, which is now a stronghold for both ISIS and al-Qaeda.

Actually, though, we should call it the Clinton/Obama/Trump policy.

You see, while conservative Republicans (like your humble correspondent) were pleading that we should stay out of Libya — that we should avoid siding with, arming, and training the “rebel” forces (the popular Washington euphemism for the Libyan mujahideen) — Donald Trump was squarely on the wrong side, demanding that Obama take action to overthrow Qaddafi.

Here is Trump in 2011 — at a point when Obama had not yet acted, and when it was abundantly clear that al-Qaeda and the Muslim Brotherhood were the backbone of Qaddafi’s opposition:

I can’t believe what our country is doing. Qaddafi in Libya is killing thousands of people, nobody knows how bad it is, and we’re sitting around we have soldiers all [over] the Middle East, and we’re not bringing them in to stop this horrible carnage and that’s what it is, it’s a carnage. . . .

You talk about of things that have happened in history, this could be one of the worst. Now we should go in, we should stop this guy which would be very easy and very quick. We could do it surgically, stop him from doing it, and save these lives. This is absolutely nuts. We don’t want to get involved and you’re gonna end up with something like you’ve never seen before.

This was exactly the line pushed by Mrs. Clinton, a Democrat Trump has heavily funded (including a whopping $100,000 to the Clinton Foundation) and whom he praised — a year after Qaddafi’s overthrow, while jihadists were running wild and attacking Western targets — for doing a “a good job” as secretary of state. It was also the line pushed by such GOP establishment progressives as Senator John McCain, the Republican politician Trump has most heavily funded, who described the Libyan “rebels” in Benghazi as “my heroes” — right before they predictably went from murdering Qaddafi to murdering Americans. Today, Libya is a failed state, a jihadist haven that threatens Western Europe, precisely because President Obama followed Donald Trump’s advice.

In today’s speech, Trump wailed that one day we were bombing Libya and getting rid of a dictator in order to protect “civilians” there, but seemingly the next day we were watching those same “civilians” suffer while their country fell apart. No, Mr. Trump. The country fell apart because, just like you, the bipartisan Beltway ruling class — whose pockets you’ve been lining for decades — is willfully blind to the difference between “civilians” and Islamists, including the violent jihadists they inevitably breed. The country fell apart because Obama did what you demanded: He bombed Libya to get rid of its dictator — aggression that was neither authorized by Congress (which the “oust Qaddafi” crowd refused to consult) nor endorsed by a U.N. mandate (which approved only the protection of civilians, not toppling of the regime).

Without a trace of irony, Trump went on in his speech to decry the killing of our ambassador to Libya and three other American officials in Benghazi, with no effort made to save them. He’s right . . . but why did Clinton and Obama resort to their “blame the video” fraud? Because they were desperate to divert attention from the real cause: the very policy that Trump had championed, which empowered jihadists in eastern Libya.

Trump also blamed the rise of ISIS on the 2003 invasion of Iraq. Since the start of his presidential campaign, and yet again in his speech today, Trump has portrayed himself as a prescient but lonely dissenter from the decision to remove Saddam Hussein — notwithstanding that there was a far better case for ousting Saddam, an American enemy who was supporting terrorists and in gross violation of U.N. resolutions, than for the Qaddafi ouster that Trump ardently supported.

But Trump is not being honest. In a September 2002 interview, while military action against Saddam Hussein was being debated, Trump said he not only supported the prospect of invading Iraq but “wish[ed] the first time it was done correctly” — an obvious reference to the 1991 Gulf War. That is, Trump believed the real mistake was failing to invade Iraq eleven years earlier.

In the event, once our forces had expelled the Iraqi army from Kuwait in 1991, President George H. W. Bush did consider Trump’s recommended course. He opted not to send our troops into Baghdad to remove Saddam, though, because he feared destabilizing the combustible region — Saddam’s Iraq being a counterweight to the equally loathsome Iranian regime. That is, Bush followed the policy Trump now claims to favor but condemned when it was actually followed. And of course, Trump only condemned it eleven years after the fact, because Saddam was still a problem . . . which Trump first thought the second President Bush should remove . . . but then condemned Bush for removing.

“American action” in Syria, according to Trump, is the third cause for the rise of ISIS. But the action in Syria has been inaction, which Trump claims to favor . . . except, you know, when he doesn’t. The mogul slammed Obama for his passivity after Bashar Assad, Syria’s dictator, crossed Obama’s “red line” warning him not to use chemical or biological weapons. Okay, then . . . what? Does Trump think Obama should have invaded Syria and ousted Assad? No, his speech today rejected interventions for the purpose of regime change.

So then, since there was no vital American interest at the time in intervening in Syria’s civil war, does Trump think Obama should not have drawn his red line in the first place? Apparently not: He claims his foreign policy would be supported by both parties. Putting aside that there is very little in the way of policy — foreign or otherwise — on which Republicans and Democrats agree, it is the consensus of both parties that the proliferation and use of weapons of mass destruction should be severely discouraged.

That is why Obama drew his red line, even though he eventually thought better of enforcing it. Is there any reason to believe Trump would have acted differently? Is there anything in his career that suggests the reality-TV star would not bounce between contradictory positions based solely on his perception of the public pulse?

It is true that, much of the time, American foreign policy is incoherent, or at least appears to be. Mostly, though, that’s because it’s hard.

Sometimes our vital interests dictate that we must intervene; other times, it appears our intervention could be very helpful to others in distress, but there is little in it for us besides risks and costs. And when Islam is involved, as it has often been for the last 30 years, there is a chasm between things as we wish they were (“religion of peace”) and things as they truly are (sharia supremacism, rampant anti-Semitism, and, as the Muslim Brotherhood put it, “civilization jihad” against the America and the West).

The result is a constant stream of excruciating choices. Sometimes what appears to be incoherence is actually learning from our mistakes, cutting our losses, or reevaluating our interests as circumstances change.

What is incoherent, though, is populism — Trump’s brand. It is knee-jerk demagoguery: Say whatever will get a rise out of the masses; don’t fret over whether it is at odds with whatever bromide you’ve previously spouted; and, when called on the inconsistencies attack the messenger.

Today’s speech conveyed no comprehension of what caused ISIS to rise — of where it came from (al-Qaeda), of what drives it ideologically (sharia supremacism), or of the fact that it is just a subset of a much bigger challenge. Trump merely continued to do what populists do: He told you the people you love to hate are incoherent and incompetent. He never mentions that he was with them all the way, and never offers a reason to think he is any more coherent and competent — just more shallow.