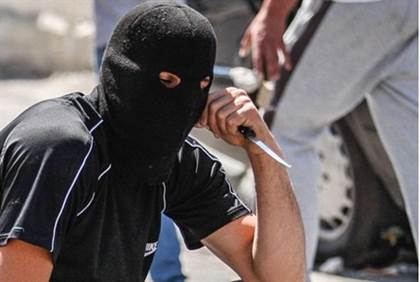 [Arab Muslims] stabbed a border guard and an IDF soldier in separate incidents today (Saturday). These were the second and third stabbings this week.

The border guard was stabbed in the back late this afternoon near Tapuah Junction, in northern Samaria. Other guards quickly responded by opening fire on the terrorist.

Lance Corporal B., who ultimately killed the terrorist, stated, “Suddenly a [so-called] Palestinian appeared and began stabbing one of the guards in my team. Within a moment we realized that it was an attack and I understood that I needed to act quickly. I opened fire in order to take out the terrorist.”

Abdelhalim Jaafreh, head of the Red Crescent in Nablus, told AFP the suspected assailant died of his wounds. “He was critically wounded by five bullets, we tried to save him but he died,” he said.

[Arab] sources identified him as 16-year-old Ahmad Taj from Nablus.

Police say that the guard was lightly wounded.

Earlier, around 11:30 am, another [Arab Muslim terrorist] stabbed a soldier near a checkpoint on highway 443 in Samaria, the army said. The soldier, who was also lightly wound, managed to draw his gun and wound the terrorist in the shoulder.

Reports indicate that the attacker was 19 years old and carried out his attack while the soldier was attempting to give him water.