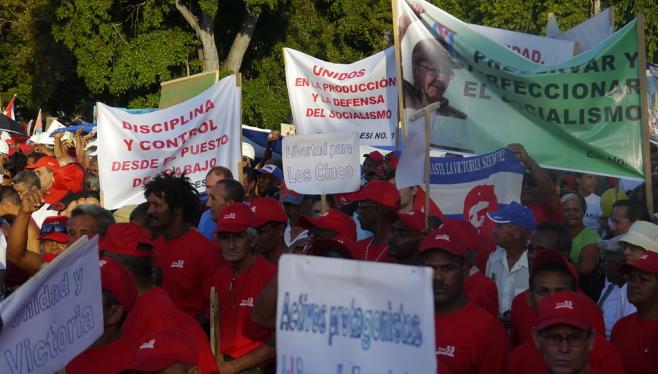 President Obama quickly gained a giddy cheerleader for his historic move toward normalizing relations with Cuba: People’s World, flagship publication of Communist Party USA. In fact, communists are commending not only Obama’s hand in Cuba but also Pope Francis’ hand. They are proclaiming a new holy trinity: Fidel Castro, Barack Obama, and Pope Francis. No kidding.

People’s World is the successor to the Daily Worker, the longtime Soviet-directed and funded mouthpiece for the American Communist Party. As I write, there are several excitable articles posted there, including a breathless piece by one of its top reporters, titled, “U.S. and Cuba announce re-establishment of diplomatic relations!” It hails the “breathtakingly radical agreement to change the relationship between the two countries.”

If there’s one thing that communists know and like, it’s the breathtakingly radical, beginning with Karl Marx’s Communist Manifesto, where communism’s godfather described the ideology as “the most radical rupture” in traditional relations and ideas.

Most revealing of People’s World’s support for Obama’s Cuba move is an editorial titled, “Obama’s historic shift on U.S.-Cuba relations.”

“Americans and Cubans woke up on Dec. 17 to the jaw-dropping news that the U.S. is making a monumental shift in its relations with Cuba,” began the editorial, linking to its own press release. “The president’s actions, negotiated with Cuban President Raul Castro and with the help of Pope Francis, set the stage for an end to the failed 54-year-old U.S. embargo against trade with Cuba, and opened up, as Obama put it, ‘a new chapter among the nations of the Americas.’”

Forward it is with the new chapter.

“These remarkable changes are in the interests of the American people,” insisted the communist organ, speaking for the interests of the American people. “This move by Obama is a historic sea-change in U.S. foreign policy. It opens up tremendous possibilities for progressive exchange with the socialist island 90 miles to our south, a country that has been a beacon of hope and progress for the hemisphere and the world. It took enormous courage by this president.”

Note those words: opportunities for “progressive exchange” with Cuba, a socialist “beacon of hope and progress for the hemisphere and the world.”

As for Obama’s “enormous courage,” it is directed not at resisting a Marxist-Leninist dictator but something far worse: Republicans. People’s World fingered the bad guys: “The Republican right-wing has already responded with rabid criticism and more can be expected, especially once the new Republican-controlled Congress takes office in January.”

These cold-hearted, unprogressive Republicans are opposing this and other Obama “bold progressive actions.” The Democratic president’s change for Cuba, says the communist editorial board, “deserves our unqualified support.” It merits a “broad base” of support, including from “workers, religious and social justice groups,” and has “the makings of a multi-class, broad people’s coalition…. The left should help champion this.” The president’s action is “music to the ears of everyone who believes in peace and international people’s solidarity.”

Speaking of solidarity, American communists not only finally have a president they like; they finally have a pope they like. As they have done so many times since he assumed the chair of St. Peter, communists were lavish in their praise of Pope Francis: “Of note is the role played by Pope Francis in facilitating this enormous development. Both Obama and Castro thanked the Pope. This new leader of the billion-strong Catholic Church has stirred the world with his advocacy for the poor, immigrants and the oppressed.” Communists are hailing these three great men of change: “All three men—Obama, Castro and Francis—it can be said, are change-makers, taking bold steps—even if they go against some past orthodoxies—to reflect the new realities, complexities and values of the 21st century.”

Pope Francis finds himself in the curious company of Fidel Castro and Barack Obama, a trio that communists at People’s World find grandly inspiring. I never thought I’d see communists so adore and so frequently agree with a pope.

People’s World concludes with a reminder to change agents everywhere to mark their future calendars for December 17, a date when a new kind of Christmas gift was given to the world:

This is a moment to embrace, to celebrate and to grasp hold of. It is not a moment to damn with faint praise. Let us all remember December 17, 2014, as a day when that long moral arc of history bent towards justice. Thank you, President Obama, for this great holiday gift of hope, peace and goodwill.

Now it’s up to all of us to work hard—lobbying, letter-writing, sign-holding, Facebooking, tweeting, organizing—to support the president’s action and demand that Congress pass a law that ends the embargo completely. Contact your senators and representative now! Get your friends, neighbors and co-workers to do the same.

Alas, a hearty Christmas message from communists. They are celebrating this season of the birth of Christ with a “great gift” from their favorite president, Barack Obama.

Finally, I would be remiss if I didn’t note the official statement on Cuba at the website of Communist Party USA. It heralds Obama’s action as “Historic. Earthshaking. Breathtaking…. a victory for peace, sovereignty, democracy, justice and friendship between the peoples of the US and Cuba.” It concludes: “today is a day to celebrate.”

When communists are celebrating America’s position on Cuba… that is not comforting.

Look, I concede that there are pros and cons to normalizing the relationship with Cuba, with plenty of respectable arguments from varying sides. I know them well. I also know that the communists don’t possess them.

Moreover, Barack Obama is not the man with the wisdom or background to weigh these arguments, nor does he carry the Nixon-goes-to-China credibility to commandeer this shift. To the contrary, as I’ve written here before, Barack Obama is truly our first Red-Diaper Baby President. Who trusts him to make this sort of momentous decision on Cuba?

Well, the comrades at People’s World and Communist Party USA do, which means that you shouldn’t. When you’re on their side on an issue, it’s time to think twice.