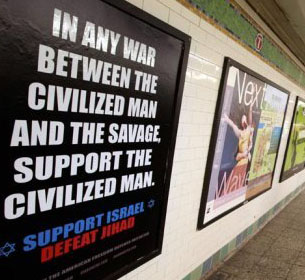 The US Supreme Court rejected on Monday an appeal from a pro-Israel group seeking to place ads on the Boston-area mass transit system, AP reports.

The ads are sponsored by the American Freedom Defense Initiative (AFDI), also known as Stop Islamization of American, and they describe the [Israeli Arab] conflict as a war between the “civilized man and the savage.”

The Massachusetts Bay Transportation Authority (MBTA) initially rejected the AFDI ads, asserting they could be construed as “demeaning or disparaging” to [so-called] “Palestinian” Arabs and Muslims.

AFDI argued the rejection violated its right to free speech and showed a double standard, as the transit agency had previously allowed a pro-Palestinian group to run an ad on the Boston T.

The group has seen its fair share of legal battles for its pro-Israel and anti-Islam ads on public transportation in cities across the US.

An appellate court judge in Philadelphia ruled in March 2015 that the Southern Pennsylvania Transportation Authority (SEPTA) had to allow a number of AFDI’s pro-Israel ads to appear on its buses.

Carrying the tagline, “Jew Hatred: It’s in the Quran,” the ads called on the United States government to “stop the hate” and “end all aid to Islamic countries.”