Video: J-Street speaker calls for destruction of Israel – to applause!

Here is Marcia Freedman, in a J-Street panel discussion on Liberal Zionism and sitting next to Peter Beinart, describing how she believes that the Jewish people should not have a state, and that instead they should live as a minority in an Arab Palestine as a “protected minority” – in other words, as dhimmis.

I kept all the context (although I accidentally cut out the applause at the end):

The moderator didn’t challenge her, and as far as I could tell neither did any other panelists.

Isn’t it interesting that at a conference that claims to be “pro-Israel, pro-peace” and that hammers away at how it wants a two state solution, there is no objection to this one-state solution where Jews are “protected” by people who want to kill them?

J-Street refuses to let Alan Dershowitz, an advocate of a two-state solution since the 1970s, speak. But this crazy lady who thinks that Israel treats Arab citizens worse than Arabs would treat Jews is given a platform, without a single dissenting voice that I could find, either at the session or on Twitter afterwards, from J-Street members or attendees..

In fact, J-Street U tweeted her remarks seemingly admiringly:

I am reminded of a series of tweets a few days ago by a BDS supporter and anti-Zionist who said that J-Street was her “gateway drug” to hating Israel: 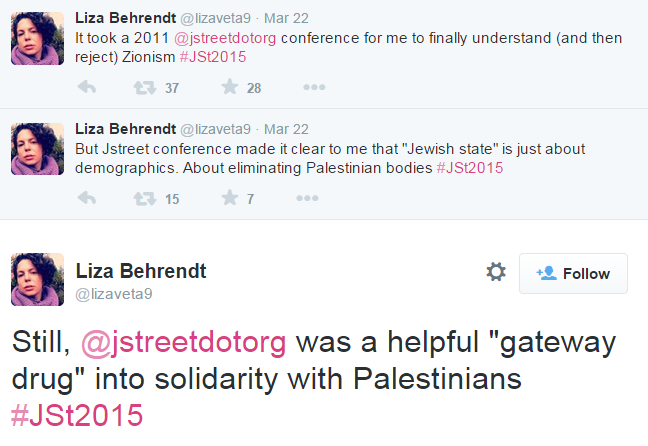 J-Street has an open tent policy for people who want Israel to disappear, and spends most of its time attacking Jews who passionately love Israel.

Worse than that is that despite its avowed purpose, the organization cannot and does not defend Israel’s existence against its critics – instead, it gives its critics a platform where they can spout their hate unopposed.

My test for whether people are really “pro-Israel” stands, and J-Street has flunked.

This is not exactly pro-Israel, or pro-peace.