While Obama makes deals with Iran: US Marine imprisoned in Iran being drugged, whipped, and tortured 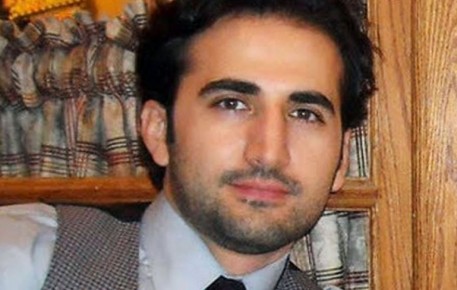 This undated file photo released by his family via FreeAmir.org shows Amir Hekmati.

The family of a U.S. Marine imprisoned in Iran for nearly four years says the American has been drugged, whipped and told a heartbreaking lie that his mother died in a car accident while he awaits a retrial.

The sister and brother-in-law of Amir Hekmati appeared on Fox News Channel’s “On the Record w/ Greta Van Susteren,” where they described in chilling detail the torture that the veteran has endured since his arrest in August 2011. Hekmati, they said, has suffered stun-gun assaults, has been whipped, dosed with lithium and hung by his arms while held in the Islamic Republic.

But the worst abuse of all may have been the emotional torture of being told by cruel guards that his mother had died, according to his sister, Sarah Hekmati.

“He was put in stressful positions for long periods of time,” said Sarah Hekmati. “He had to endure the news that they had told him that his mother was killed in a car accident; just the emotional torture of being told that and not having a way to contact our family.

“He was drugged with lithium for a long period of time and then forcibly it was removed so that he would have to endure painful withdrawal symptoms and then he was whipped on his feet.”- Sarah Hekmati

“To be told that and not know if that’s true or not,” she also said. “He was drugged with lithium for a long period of time and then forcibly it was removed so that he would have to endure painful withdrawal symptoms and then he was whipped on his feet.”

Sarah’s husband, Dr. Rami Kurdi, also detailed some the other horrific torture that Hekmati has endured.

“The torture we heard of as described by Amir himself was cold water, dirty cold water poured on the ground whenever he’d fall asleep to kind of keep him awake,” he said. “Lights on day and night, just to interrupt his sleep pattern. And these were just the smaller things. He was hung by his arms, Tasered – hung by his arms for an indefinite amount of time.”

Hekmati was arrested in August 2011 on allegations of spying for the CIA while visiting his grandmother and other relatives in Iran. In December of that same year, Iranian state television aired a videotaped confession from the leatherneck in which he had stated that he had sneaked into Iran to establish a CIA presence. His family said at the time that he was coerced into making the statement.

In January 2012, Hekmati was sentenced to death, but the ruling was overturned two months later, after the Iranian Supreme Court ordered a retrial. Two years later, Hekmati is still awaiting a new day in court. His family told FoxNews.com earlier this month that they believe the recent “framework” nuclear agreement between the West and Iran will help to free the Marine.

“Now that Iran has sat at the table next to the United States, working diligently to come to an agreement for a nuclear program, we ask Iran if they still consider the United States a hostile country and if they do not, perhaps it is time they open the prison gates and allow the Red Cross to visit Amir without guard and report on the status of his well-being,” the family said in a written statement to FoxNews.com. “We call on them to show the international community that they are serious about their intentions and as an act of good faith, return Amir to his dying father, his worried mother, and the family that badly needs him.”