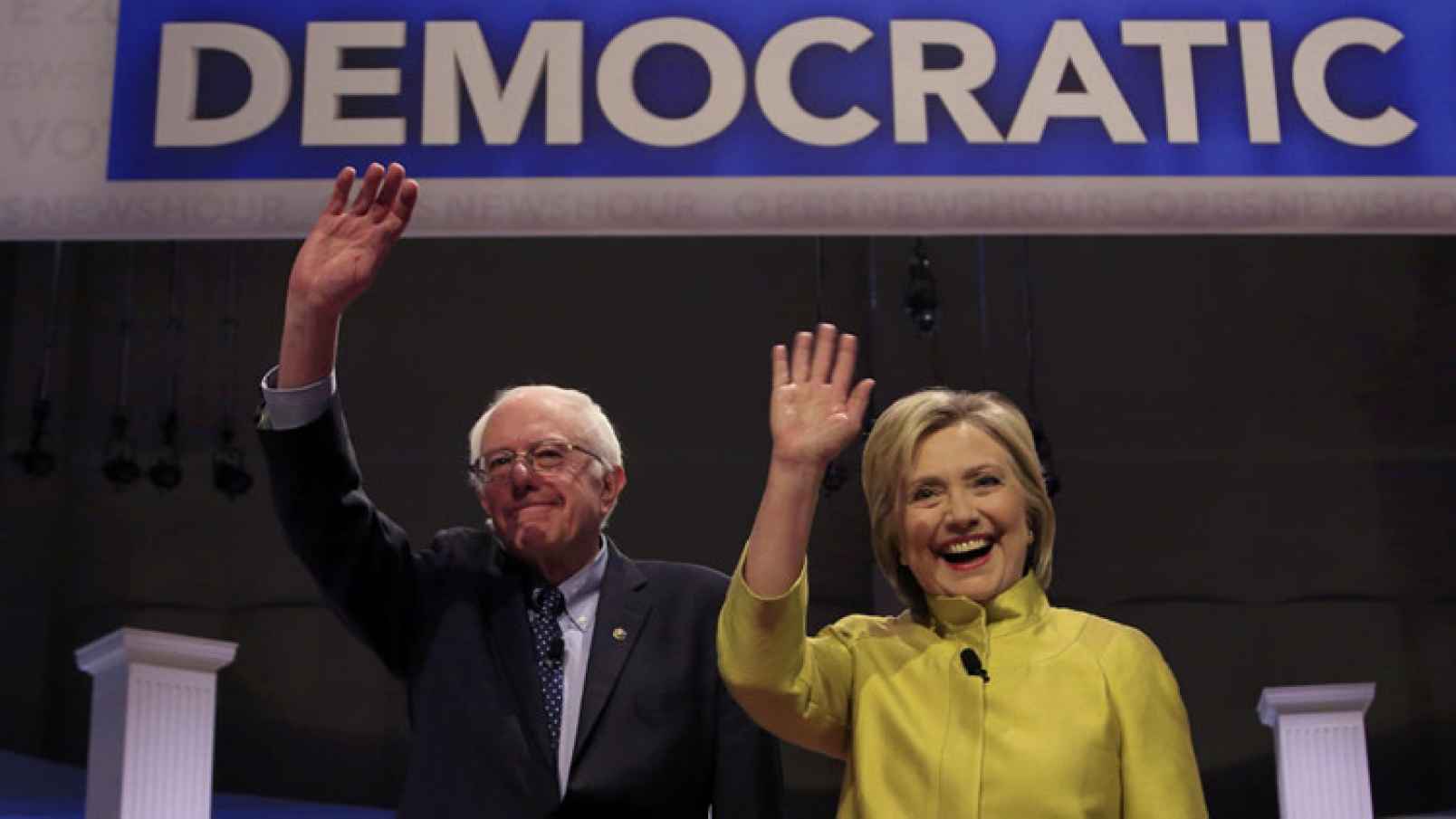 PBS, a venerable leftist institution long since past its prime, hosted two other leftist institutions past their prime, Bernie Sanders and Hillary Clinton, for the special Wisconsin edition of the Democratic Party’s newest hit show, Who Wants to Be America’s Top Socialist.

“I believe in government,” Bernie Sanders declared. And that was the theme for the night.

A political party that does not believe in G-d or that 2 + 2 = 4 believes in and passionately loves government. Its perverted love affair with government gave birth to two political hacks who couldn’t manage to mow the lawn without setting it on fire, but who want to run the country and the world.

In an eye-meltingly mustard yellow jacket, the uniform of some alien space armada invading the planet, Hillary Clinton glared balefully into the camera and promised the nation twice as much free stuff in return for their submission to her ruthless rule. Bernie Sanders, who kept coughing as if he might not live through the debate, never mind the election, upped the ante to three times as much free stuff.

“Let’s not insult the intelligence of the American people,” Bernie Sanders insisted. “People aren’t dumb.” The American people might not be dumb, but his voting base, which believes it can get free stuff without ever having to pay for it, still doesn’t understand how math works.

“I feel like we have to level with people,” Hillary Clinton said, while dodging and denying multiple investigations. The only time she has leveled with anyone is while running them over with her car.

The debate featured a spirited discussion on many key issues of vital importance to Americans such as Henry Kissinger, Hillary Clinton’s gender and who loves Obama more.

You know your party’s candidates are old and out of touch when the highlight of your 2016 political debate is an angry argument over Henry Kissinger. But Bernie Sanders, deep in the throes of senility, is still living in his glory days of voting against the Iraq War when he was a mere child of 61 years.

Bernie Sanders shouted, “This is 2016”, as if surprised to find out what year it was.

Not satisfied to debate the Iraq War, Bernie Sanders decided to debate the Vietnam War. Somehow he didn’t bring up his opposition to the Mexican-American War, the Civil War and the American Revolution.

“I will not take advice from Henry Kissinger,” Sanders screeched, reassuring those of his supporters still worried that the 92-year-old Kissinger is secretly running the country from the Upper East Side. And considering that his base not only carries around copies of The Report from Iron Mountain, but believes that it and Griffin’s The New Pearl Harbor are real, they probably still aren’t reassured.

But this wasn’t just a debate between two senile Socialists mired in 19th century economic ideas; it was also a fierce battle between two candidates with so few ideas that they were literally reciting the same exact things that they had said at the previous debates.

Bernie Sanders launched into his same exact speech about Teddy Roosevelt, the trust buster, and the need for a 21st century Glass Steagel. In response to the same attack Bernie Sanders had already made about the Iraq War, Hillary Clinton launched into the exact same response about Obama turning to her and trusting her Judgment by making her Secretary of State.

The Democratic debate was like watching two senile folks having the same exact argument every single day without remembering that they had already had it.

Both candidates could have just brought their tape recorders, put them down on their respective podiums and then spent the rest of the debate in the bathroom. And that would have been a better move because at least the country would have been spared listening to an argument about Henry Kissinger between two aged leftists proving their political purity while the country is out of work.

Political purity was really the only substitutive topic as Hillary Clinton and Bernie Sanders fiercely debated over who loved Ted Kennedy more and who disagreed with Barack Obama less. In a surreal Orwellian moment, Hillary Clinton and Bernie Sanders frantically piled on more praise for Obama’s tremendous economic accomplishments as if they were delegates to a Stalinist party congress.

A nation out of work and out of hope may however differ with their sunny view of Obama’s achievements.

Despite the mutual hateful glares, Hillary Clinton and Bernie Sanders had very little to disagree over that didn’t involve Henry Kissinger. They repeatedly pronounced their agreement with each other so many times that even their supporters had to wonder why they should even bother voting.

Half the time Bernie Sanders was repeating the same things Hillary Clinton had just said, only angrier and with arm movements that were unintentionally directing an orchestra playing The Internationale.

And, appropriately enough, Sanders opposed trade with every country except Communist Cuba.

Hillary Clinton strived to portray Bernie Sanders as a single-issue candidate who was unable to address the full intersectional binders of women, black people, Latinos and the LGBT community. Bernie Sanders responded by arguing that he will improve race relations by taking away tax breaks from the rich.

Hillary Clinton tried to see how many times she could mention “structural racism” for a social justice drinking game. “I am not asking people to support me because I’m a woman,” she claimed. And that’s true. This is what her surrogates keep doing when they threaten women with hell if they don’t vote for her. Like her SuperPACs, this has nothing to do with her and she’s also shocked at all the gambling going on at Rick’s Cafe.

There was one relevant question. In an unprecedented move, Hillary Clinton was asked about taking money from George Soros. And you didn’t have to be the old Nazi collaborator himself to gamble correctly that she would duck the question like the world’s tallest man at a limbo contest.

The first rule of puppetry is never admit to the existence of the puppeteer. And despite Bernie’s hollow rants about the 1 percent, he never spoke the name of the progressive Voldemort either.

“The only thing we have to fear is fear itself,” Sanders said, quoting FDR, before calling for redefining the role of government, but the debate suggested at least two other things that Americans should also fear.