Why the Iran Nuclear Deal Will Mean War 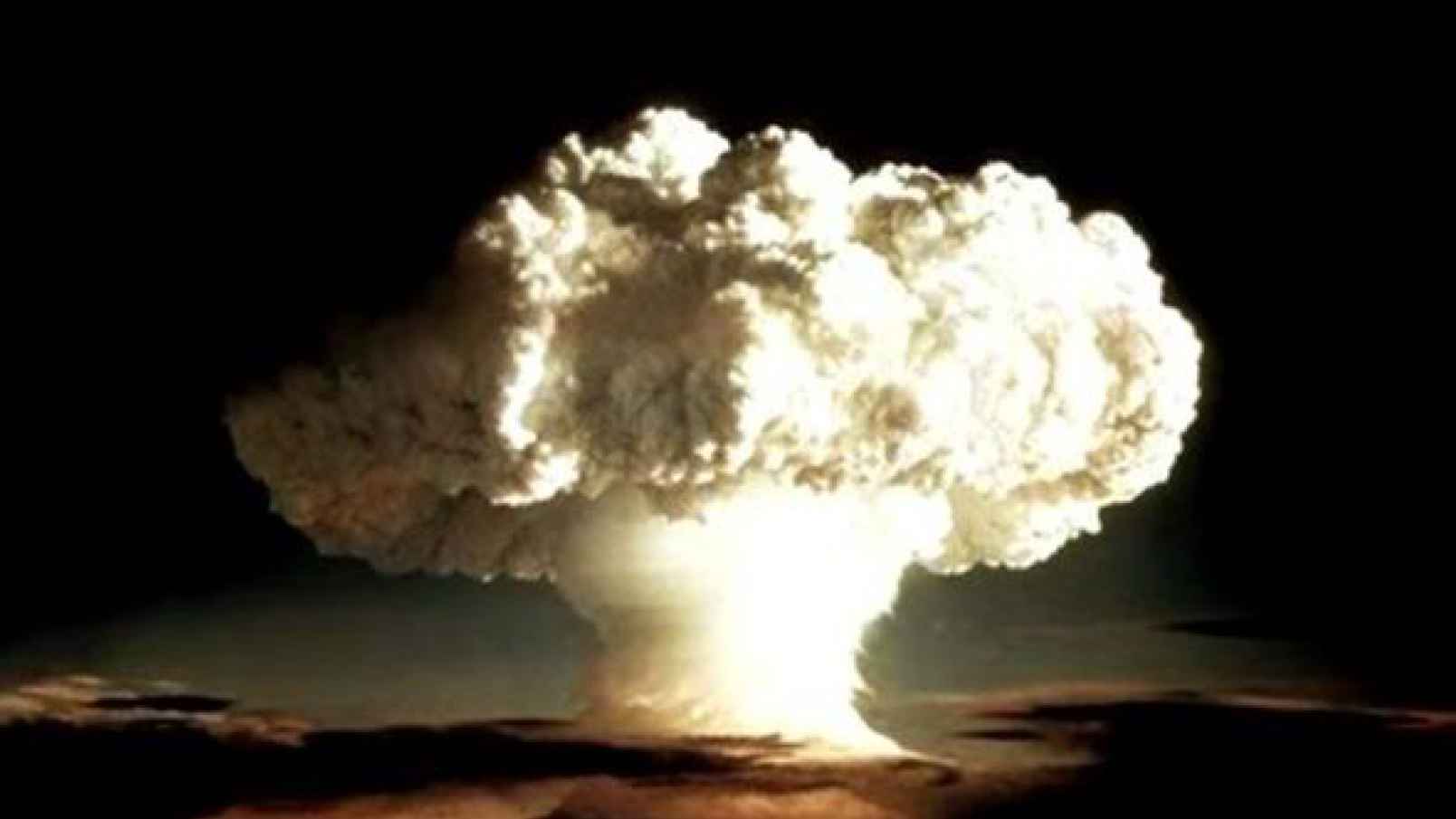 Imagine Jihadists with nukes on both sides.

Like a snake oil salesman trying to move a gallon of lies by promising that it’s either buy the bottle or die, Obama sold the Iran deal as the only alternative to war. In fact the deal is a certain road to war.

Or as Churchill said, “You were given the choice between war and dishonor. You chose dishonor, and you will have war.” Before long, the British and French were facing Czech tanks redesignated as Panzers that had been seized as part of the Nazi spoils of appeasement.

When Obama claimed that the Iran nuclear deal was the only alternative to war, he was lying in more ways than one. The United States has already been dragged into Iran’s war for control of Iraq. That war was one of the levers that Iran exploited to get its way on its nuclear program. Iran also came close to dragging us into its war in Syria and we are hovering on the edge of being dragged into Yemen.

Iran and ISIS have done a thorough job of carving up entire countries into Shiite and Sunni blocs. And there’s no sign that this Islamic realignment of the Sykes Picot borders is going to stop. If the process continues, the scale and scope of the war will expand and transform the region away from nation states.

Everyone will have a choice between backing a Sunni ISIS [Islamic State] or a Shiite ISIS. Obama chose the Shiite ISIS.

This would be happening even without the deal, but Iran’s victory and Obama’s appeasement will speed up the process. Russia is blatantly joining the Shiite military coalition as part of Tehran’s victory celebration. And the Russians aren’t there just to protect Assad, but to push America out of the region. As areas of operations overlap, there will be incidents. And Obama will back off once again.

But it’s not just about Syria. Iran promised its Russian and Chinese backers that they will benefit from a major regional realignment. Nations allied with the US will be overthrown or suppressed. And once that process really gets underway and will begin to threaten oil supplies, even a Democrat won’t be able to stay out. But by then America will have little credibility, few allies and major strategic disadvantages.

The real test won’t be in Syria. It has already come and gone in Yemen. It will probably come in Bahrain. Bahrain has a majority Shiite population and is the home of the Fifth Fleet. During the Arab Spring the Saudis put down Iran’s “civilian” uprising in Bahrain using tanks. The next time, it won’t be that easy for the House of Khalifa or the House of Saud. If there’s one thing that Iran knows it’s how to arm and train insurgencies and this time around its bid for a takeover of Bahrain will have Russian backing.

Iran’s Islamic Front for the Liberation of Bahrain played a significant role in the Arab Spring protests under the umbrella of political Islam and human rights organizations. Iran’s ideal game plan would be for its front groups to win Western political backing for a takeover the way that the Muslim Brotherhood did in Egypt. Turning over Bahrain to admirers of the Iranian Revolution would seem insane, but so was turning over Iran to Khomeini or Egypt to Al Qaeda’s parent Muslim Brotherhood organization.

The Saudis have had to consider the possibility that Obama, Hillary or Biden would back Iran over the Saudis in Bahrain as they did in Iraq and Yemen. And they have been making their own plans.

Some months after Iran’s Ahmadinejad visited Cairo and met with the Muslim Brotherhood’s Morsi, the Saudis reversed the Qatari-Obama coup that had put the Muslim Brotherhood in power. As the deadline for last year’s negotiations with Iran approached, the Saudis began dumping oil to hurt Russia and Iran. A similar Saudi move against Iran had helped bring on the Islamic Revolution. The Saudis probably don’t expect to undo that disaster, but they were hoping to offset any Obama-backed Iranian recovery.

Instead of fighting to keep sanctions in place, the Saudis were instead poisoning the well.

Whether he understood it or not, by signing off on Iran’s Shiite bomb, Obama was also signing off on an Egyptian-Saudi Sunni bomb. Israel’s nuclear capability was tacitly understood as a defensive weapon of last resort that would not trigger a regional arms race. Genocidal military invasions of Israel came to an end and any weapons remained under wraps.

Iran however is not looking for a deterrent weapon against its neighbors. With the fall of Saddam, it faces no serious threat of invasion by Sunni forces. Today its nuclear program can have no other purpose except to expand its power and territory while forcing the United States out of the region. Nuking Israel would help seal its right to rule over the Muslim world while intimidating its enemies.

A Middle Eastern MAD with Iranians and Saudis in a nuclear standoff would be bad enough, but both powers have a long history of using terrorists to do their dirty work. And the transfer of nuclear materials to terrorists is a lot harder to track than ICBM launches.

Iran and Saudi Arabia getting the bomb won’t be the end. It will only be the beginning. A decade ago, Iran had already funneled a billion dollars into helping Syria get its own nuclear reactor. A nuclear Iran will expand its points of proliferation to the Shiite regime in Baghdad, to Hezbollah in Lebanon and any other Shiite allied states it can set up. The Saudis will expand their own nuclear capabilities to their GCC allies and Egypt so that instead of two nuclear powers, there may be as many as ten nuclear nations.

Imagine the Cold War in miniature with a lot more proliferation and Jihadists with nukes on both sides.

That is what the Iran nuclear deal really means. Every Sunni kingdom will be glaring out from under its own nuclear shield as petty tyrants keep one finger on the populace and the other on the button. A single popular uprising could see nuclear weapons in the hands of Al Qaeda or ISIS.

On the other side, Iran will be aggressively expanding its influence while engaging in escalating naval confrontations with America and its allies. It’s possible that Obama, Biden or Hillary will be able to run away fast enough to avoid a war, but they won’t be able to avoid the resulting economic chaos. And the war will follow them home as Muslim countries have a history of settling their scores by aiming at more “legitimate” non-Muslim targets. That is how 9/11 happened as part of a Saudi power struggle.

And if the United States stays, our people will be trying to keep the peace in a region gone nuclear where American bases will be prime targets for Iran and its terrorist allies. The United States will retaliate against a nuclear strike directly from Iran, but what if it comes from one of the Hezbollahs?

The question isn’t whether there will be a war. It’s how bad the war will be.

That is what Churchill understood and Chamberlain didn’t. While Churchill had fought in Afghanistan against the forerunners of the Taliban, Chamberlain had run family businesses. He saw the military as an unnecessary expense and war as something that could be negotiated away. Churchill knew better.

We are up against something similar today.

The Middle East has exploded before. It will explode again. All we’ve been doing is keeping the lid on. Obama’s surrender means that we won’t control how that explosion happens, but it won’t stop us from getting dragged in anyway once the bombs start going off.

Obama’s advisers have told him to outsource American foreign policy to Tehran. And that’s what he did. Turning over your power to your enemy won’t make him your friend. It won’t stop a war.

It will make the war much worse.