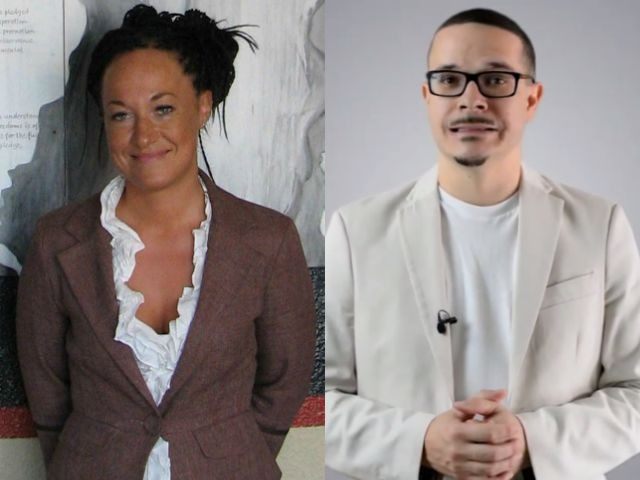 With Milo Yiannopoulos’ shocking report that Black Lives Matter activist Shaun King is in fact white – according to Yiannopoulos, quoting blogger Vicki Page, “King is white and has been lying about his ethnicity for years” – taboo questions now arise about the nature of race in America.

King, of course, isn’t the first leading black activist with no black biological background: Rachel Dolezal, former head of the Spokane, Washington NAACP and adjunct professor of African-American studies at Eastern Washington, turned out to be a white woman.

However, King was a key figure in the same movement that now runs the Democratic Party, using the tools of racial victimhood and division to leverage power.

All of this demonstrates one undeniable fact: being black in America in 2015 is perceived as a status symbol and an advantage. This does not deny the horrific and evil history of racism against black people in America. It also does not deny the fact that a disproportionate number of black people live in poverty and suffer as victims of crime (primarily from other black people, just as white people suffer crime primarily from other white people).

But Dolezal and King make it clear that America’s attempts to repair the effects of that horrific history have now made black skin advantageous for a certain subset of activists, which is why people like Dolezal and now allegedly King have masqueraded as black for personal advantage.

Victim status is treasured in America, and black skin guarantees automatic victim status thanks to America’s history. In America’s racist heyday, black people attempted to pass for white in order to escape destitution and persecution; today, white people attempt to pass for black — or appropriate black culture — to win popularity.

In areas across American culture, blackness is beneficial. That’s why people like King and Dolezal seek its imprimatur, even under allegedly false pretenses.

For example, King allegedly received a scholarship to Morehouse College from Oprah Winfrey on the basis of his allegedly fake race. He apparently took a scholarship from a black person in order to attend Morehouse. But the fact that scholarships based on race are available from many foundations – and only to racial minorities – means that it is definitionally advantageous to be a member of a minority for purposes of obtaining one.

That’s true in terms of admission to universities as well: standards are lower for blacks generally at top universities. A Princeton University study showed that blacks receive a “bonus” of 230 points on SAT scores versus their competitors; by contrast, Asians are penalized 50 points. The same holds true for finding a position in academia. Rachel Dolezal began as a white artist at Howard University but quickly found herself marginalized. Then she became black, and her art found a place at the United Nations, and she received an adjunct professorship at Eastern Washington University.

Similarly, the imprimatur of blackness automatically grants authority to speak on key issues of the day, including law enforcement. No wonder Dolezal ended up on the Spokane volunteer police oversight commission but left after her true race came out. And no wonder Shaun King has claimed to be victimized by “decades old racial tensions,” and parlayed such experiences into becoming a campaigner against “police brutality.” It’s hard for white people to be Jesse Jackson and Al Sharpton — or to rake in Jackson/Sharpton cash and coverage.

The imprimatur of black victimhood allows defense of the indefensible, as the Black Lives Matter movement has demonstrated. Michael Brown attacked a police officer and tried to grab his gun, then charged him before he was shot. Brown was black; the officer was white. Naturally, Brown’s name is now a synonym for heroic sainthood in the name of black martyrdom. That’s because, as one Black Lives Matter protester told Hillary Clinton, “this is and has always been a white problem of violence. There’s not much that we can do [as black people] to stop the violence against us.”

Americans across the political spectrum embrace the myth that blacks are treated unfairly disproportionately in the justice system and are largely victims of white violence. It isn’t true.

Police hesitate more often in violent confrontations with black suspects and shoot black suspects less often than white suspects in similar situations. Sentencing disparities between blacks and whites can be explained by prior records and other variables, as Larry Elder has pointed out. As Heather MacDonald of Manhattan Institute observed, “cops don’t over-arrest blacks and ignore white criminals. The race of criminals reported by crime victims matches arrest data. No one has ever come up with a plausible argument as to why crime victims would be biased in their reports.”

In fact, in inner cities, crime is underpoliced and underprosecuted, to the detriment of black people in inner city communities. As Jill Leovy, a liberal reporter for The Los Angeles Times, recently wrote in The Wall Street Journal:

In predominantly African-American neighborhoods of U.S. cities, far too many killers have gotten away with far too many crimes for far too long, fueling a disastrous murder epidemic. Solving these murders and other serious crimes of violence in black communities should be a top goal for law enforcement—and it deserves to take priority over much more widely discussed issues such as racial profiling and the excessive use of force by police in black neighborhoods, from Ferguson to Staten Island.

But that won’t happen, specifically because black activists – and white-passing-as-black activists – push against such measures based on the lie that blackness is inherently and institutionally victimized in America.

There’s a reason that people like Dolezal, and now allegedly King, masquerade as black. It’s an advantage in the academic, media, and political arena – and that’s true on both sides of the political aisle, where Barack Obama would not have been elected or re-elected without being black, and where Dr. Ben Carson would be approximately as well-known as Dr. Milton Wolf were he white. The question isn’t why King reportedly tried to pass as black. The question is why America keeps pretending that blackness is an unbreakable barrier, when in fact, it can be a tremendous asset.