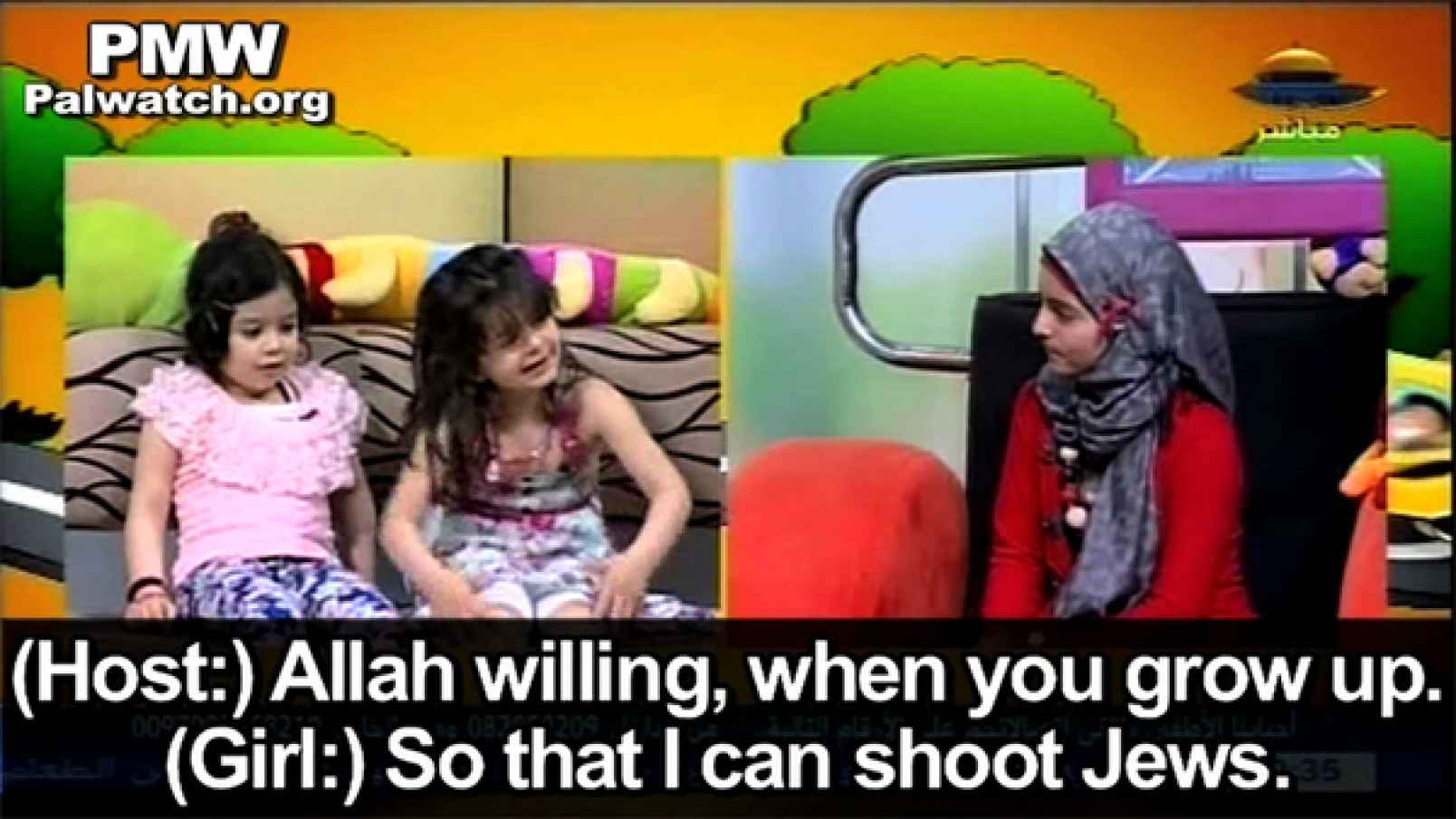 There is no such thing as the word “Palestine” or a “Palestinian”. It is a lie and a propaganda war intended to destroy Israel the Jewish people. Click here for more information.

Palestinian leaders are notorious for speaking with forked tongues. Duplicitous officials often talk of peaceful dialogue and two-state solutions when addressing Western audiences but it’s an entirely different affair when they’re behind closed doors, addressing their fellow kinsmen. In such a familiar and comfortable setting, they let their guard down and spew the vilest calumnies and conspiracy theories that more often than not, involve the Jews. They’re also not shy about what they intend to do to Israel if they ever achieve statehood. One “moderate” Palestinian leader even suggested the use of nuclear weapons against the Jewish State.

In every forum and venue, Palestinian political and religious leaders, academics, educators and journalists incite the Palestinian masses to violence. Jews are routinely referred to as apes, monkeys and pigs or alternatively, the “vilest of creatures.” Ancient blood libels, involving Jews kidnapping Muslim (or Christian) children and using their blood as a key ingredient in Passover matzah, are regurgitated with banal regularity. Palestinian children are spoon-fed hate from birth and children’s programs, mimicking the Sesame Street genre are laced with references to murder of Jews and martyrdom.  Often, this programming is financed, either directly or indirectly, by the EU and the United States State Department, making these governments complicit in the violence that results therefrom.

Western audiences are rarely exposed to such obscenities. They’re accustomed to viewing polished and often sympathetic Muslim characters who speak of the importance of peace and their desire for democracy and freedom. Of course, what it said behind closed doors, in Arabic to Arabic audiences, remains behind closed doors.

Faced with such malevolence, the importance of monitoring and exposing Arab media takes on a sense of urgency. Two organizations, the Middle East Media Research Institute (MEMRI) and Palestinian Media Watch (PMW) have stood at the forefront of this endeavor. Their efforts have borne fruit and actually forced Western governments to confront Arab anti-Semitism and more carefully scrutinize allocation of funds. In some cases, Arab entities dependent on Western financing were compelled to modify their behavior as a condition of continued financial backing.

PMW operates a website where it hosts its translated Arabic videos and other content and also maintains an account with YouTube where viewers can screen uploaded videos. On March 3, PMW uploaded a disturbing video featuring a child on a Palestinian children’s program reciting a violent poem liberally laced with references to the destruction of Israel and murder of Jews. Shortly thereafter, YouTube suspended PMW’s account. Those who attempted to access PMW’s YouTube site to view their informative content were instead treated to a terse one-line statement that stated; “This account has been terminated due to repeated or severe violations of our Community Guidelines and/or claims of copyright infringement.”

Apparently, Ramallah was upset over the fact that someone had exposed the grubs and maggots sheltered beneath the rock and immediately filed a complaint with YouTube. YouTube, either out of ignorance or malevolence, duly complied with the request to have PMW’s account suspended.

Fortunately, the suspension was brief. A flurry of protest from YouTube users coupled with negative media exposure generated by the fallout from the suspension compelled the social media site to rethink its rash and frankly, idiotic decision.

The incident is reminiscent of several recent embarrassing Facebook faux pas involving removal of benign pro-Israel posts, while leaving intact blatantly anti-Semitic images, depicting violence against Jews or alternatively, depicting Jews with grotesquely exaggerated features, wielding undue influence over the United States.  In one such episode, Facebook removed a picture of Israel’s late Prime Minister, Golda Meir, accompanied by her famous quote, “Peace will come when the Arabs will love their children more than they hate us.” Apparently, someone at Facebook determined that the quotation or image represented a “genuine risk of physical harm or direct threats to public safety.” Once again, public outcry against this obscenity compelled Facebook to quickly perform an about-face and the image with the quotation was restored.

Shurat HaDin, which recently filed a class action lawsuit against Facebook in New York Supreme Court for facilitating anti-Israel incitement, used the results of the experiment to prove its point – that Facebook maintains an extreme bias against Israel. After being exposed, red-faced Facebook executives quickly removed the anti-Israel page but the damage had already been done. No doubt the results of the experiment will be used to buttress legal claims asserted in Shurat HaDin’s filing that Facebook was unresponsive to calls for removal of Facebook pages spewing anti-Semitic vitriol and incitement and that failure led to actual physical harm against civilians.

The social media war continues unabated with anti-Israel rejectionists utilizing these mediums as tools to further their nefarious agendas. YouTube, Facebook and other social media forums have an obligation to their users to act fairly and responsibly. Content designed to educate and inform, such as the videos featured by PMW, should not be arbitrarily removed.