Beholden To No One? Trump Owes $650 Million To China And Goldman Sachs

An investigation by the New York Times revealed another aspect of Trump’s scam that many suspected – he is heavily in debt despite barking that he can’t be bought by anyone during the primaries.

…an investigation by The New York Times into the financial maze of Mr. Trump’s real estate holdings in the United States reveals that companies he owns have at least $650 million in debt — twice the amount than can be gleaned from public filings he has made as part of his bid for the White House. The Times’s inquiry also found that Mr. Trump’s fortunes depend deeply on a wide array of financial backers, including one he has cited in attacks during his campaign.

This follows the familiar pattern – Trump projects the sins he commits on his competitors all the time. While saying that his opponents were puppets who had been bought and sold by business interests, he himself is in debt to those same interests.

For example, an office building on Avenue of the Americas in Manhattan, of which Mr. Trump is part owner, carries a $950 million loan. Among the lenders: the Bank of China, one of the largest banks in a country that Mr. Trump has railed against as an economic foe of the United States, and Goldman Sachs, a financial institution he has said controls Hillary Clinton, the Democratic nominee, after it paid her $675,000 in speaking fees.

Here are some examples: 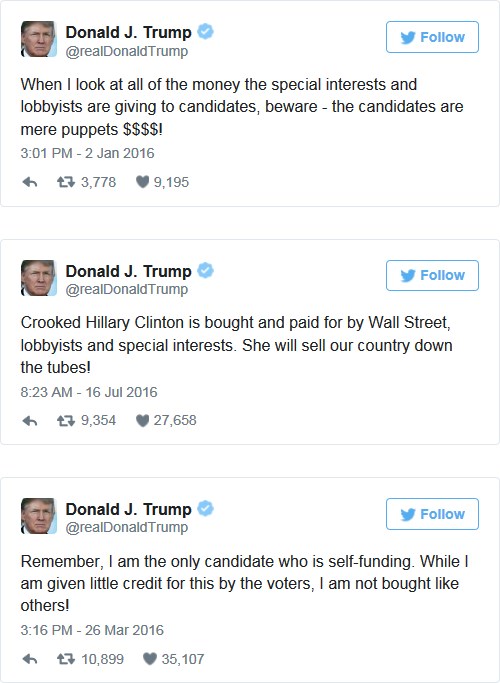 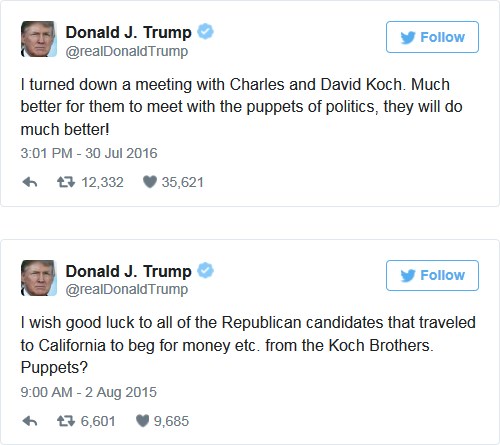 Who do you trust more – a candidate beholden to the Koch Brothers, or one who owes China and Goldman Sachs millions? And what will he do for those he’s indebted to if he gets his tiny shrimpy fingers on the levers of power?