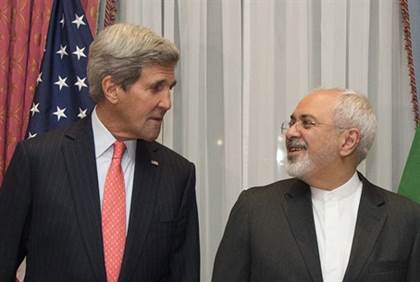 Western negotiators, led by the United States, offered two enormous concessions to the Iranian regime from earliest stages of talks: In spite of President Obama’s tough rhetoric, an eventual deal would allow Tehran to keep virtually its entire nuclear infrastructure intact, with Western-imposed restrictions automatically beginning to sunset after one decade. These allowances alone would be sufficient to give observers pause over the wisdom and efficacy of an accord. But those were only the opening salvos of the US-quarterbacked giveaway. In June, as details and rumors about the progress of negotiations leaked into the press, a bipartisan group of respected foreign policy heavyweights wrote an open letter spelling out the tough limits on Iran’s program that would be necessary in order to win their support for an agreement. This contingent included a number of former high-ranking Obama administration officials. Their concerns focused on three primary areas:

A group of influential U.S. foreign-policy strategists, including five former confidants of President Barack Obama, warned the White House Wednesday they would oppose a nuclear agreement with Iran if tough terms weren’t included in a final agreement. Among the requirements identified by the former diplomats, military officers and lawmakers were intrusive snap inspections of Iran’s nuclear and military sites, a resolution of questions surrounding secretly developed nuclear-weapons technologies and a phased reduction of international sanctions on the Islamic Republic.

Let’s examine how each of these crucial issues was resolved:

The Obama administration’s claim that the Iran nuclear accord provides for airtight verification procedures is coming under challenge from nuclear experts with long experience in monitoring Tehran’s program…Olli Heinonen, a former deputy director of the [IAEA], said in an interview that while “it is clear that a facility of sizable scale cannot simply be erased in three weeks’ time without leaving traces,” the more likely risk is that the Iranians would pursue smaller-scale but still important nuclear work, such as manufacturing uranium components for a nuclear weapon. “A 24-day adjudicated timeline reduces detection probabilities exactly where the system is weakest: detecting undeclared facilities and materials,” he said…“If it is on a small scale, they may be able to clear it out in 24 days,” Mr. Albright said in a telephone interview. “They are practiced at cheating. You can’t count on them to make a mistake.”

Once a critical negot point: “The administration said it was unlikely Iran would admit to having pursued a covert nuclear weapons program”

An Obama administration assessment of the Iran nuclear deal provided to Congress has led a number of lawmakers to conclude the U.S. and world powers will never get to the bottom of the country’s alleged efforts to build an atomic weapon, and that Tehran won’t be pressed to fully explain its past. In a report to Capitol Hill last week, the administration said it was unlikely Iran would admit to having pursued a covert nuclear weapons program, and that such an acknowledgment wasn’t critical to verifying Iranian commitments in the future…“On Iran’s alleged past weapons work, the Obama administration said it concluded: ‘An Iranian admission of its past nuclear weapons program is unlikely and is not necessary for purposes of verifying commitments going forward,’ said a copy of the assessment viewed by The Wall Street Journal.

Within six months to a year, Iran will have access to $100 billion to $150 billion in unfrozen assets due to the unwinding of sanctions, a total that doesn’t include the economic windfall to come once international firms begin doing business in Iran. As a leading sponsor of terrorism according to the State Department, Iran would thus have more money available to distribute to terrorist groups such as Hezbollah.Initially, the Obama administration argued that all of the sanctions being lifted would exclusively have to do with the nuclear program – this was their way of justifying why they didn’t make Iranian sponsorship of terrorism or human rights violations a part of any deal…But the final deal provides much broader sanctions relief to Iranian financial institutions and individuals. The deal even unwinds sanctions against Qasem Soleiman, commander of the Quds Force, which has provided aid to Hamas and Hezbollah, and killed American soldiers in Iraq.

A comprehensive rout.  The United States backed down on every single one of the big ticket items — to say nothing of the astonishing last-minute “add-ons” to sweeten the pot for Iran, or the undisclosed, unreviewable secret side agreements between Iran and the IAEA.  President Obama dismisses critics of his disastrous deal as intellectually dishonest purveyors of “talking points.”  The astounding degree to which the administration shifted its own established goalposts — offering one concession after another to an enemy regime — exposes his arrogant posture as demagogic nonsense.  Congress must vote this deal down and force our reckless president out onto an isolated, illegitimate limb.