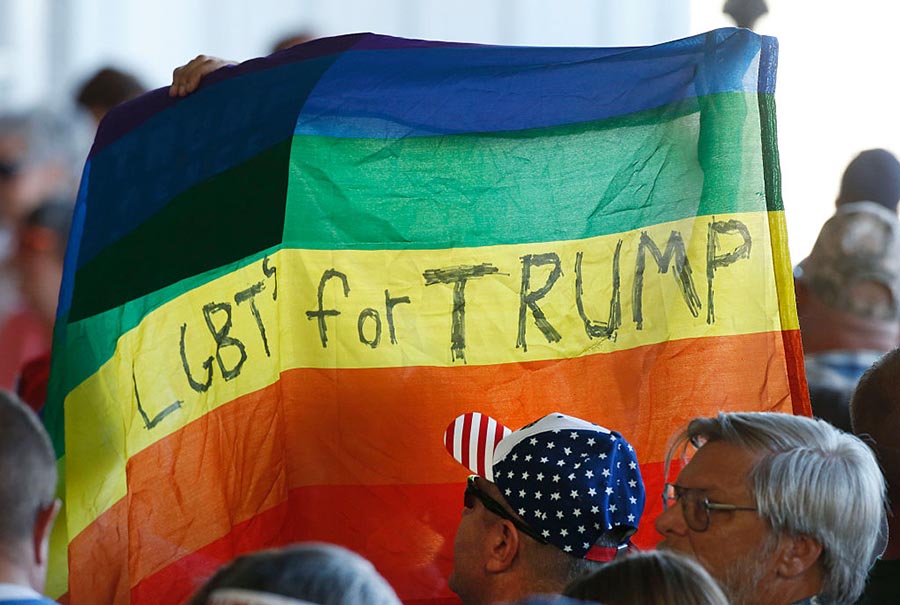 On October 30, at a rally in Colorado, Donald Trump proudly held up a rainbow-colored, gay flag on which was written “LGBT’s for Trump.”

As [religious] conservatives, what are we to make of this? Is it yet another proof that we must compromise our morals to vote for him? And will he betray us once elected?

Interestingly, major gay websites like the Advocate were not impressed with his gesture, declaring, “It’s an empty gesture from the Republican nominee, who opposes marriage equality and has a proudly homophobic running mate.”

The Washington Blade was more neutral, stating, “LGBT advocates continue to criticize Donald Trump for the anti-LGBT positions he’s laid over the course of his presidential campaign, but they can’t say he’s never waved a rainbow Pride flag.”

The Blade also quoted Chris Barron, “a gay conservative activist and founder of LGBT for Trump,” who called him “the most pro-LGBT Pres candidate ever nominated by either party.” (Spoken with true Trumper hyperbole!)

In contrast, the Advocate noted that “LGBT advocates have spurned Trump, saying that his gestures amount to little more than pandering — he opposes marriage equality and has wavered on transgender rights and the Equality Act, which would ban anti-LGBT employment and housing discrimination. Besides, his running mate, Mike Pence, has a history of support for anti-LGBT measures, including a law during his time as Indiana’s governor that would allow businesses to deny services to LGBT people based on religious reasons.”

The Advocate also pointed out that “the Log Cabin Republicans [the primary gay Republican group] refused to endorse Trump” and an “earlier poll shows that almost three-quarters of LGBT voters will choose Clinton in the election.”

And it was the influential Human Rights Campaign (HRC) that labelled Trump a “Huge Bigot,” stating, “We have seen so much progress for the LGBTQ community under the leadership of President Barack Obama, and it all could be reversed by a Donald Trump presidency.” (For a scathing attack on Trump from the HRC dated August 25, 2016, see here.)

Overall, then, it would seem that most LGBT Americans will not be impressed by Trump’s gesture in Colorado, as he walked around the stage during the singing of “G-d Bless America” and proudly unfurled the rainbow flag.

But how should we react if we are conservative followers of [the Bible] who plan to vote for Trump? Doesn’t this mean we are forfeiting our integrity and selling our souls?