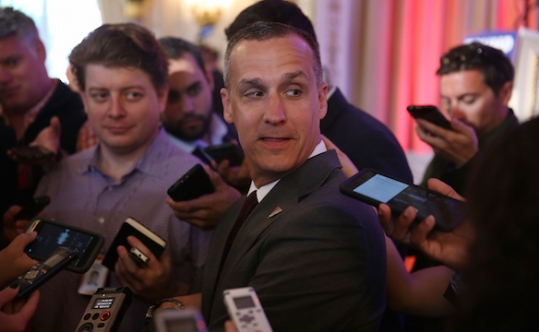 Donald Trump’s campaign manager was charged with battery against a Breitbart News reporter on the same day police released a video apparently corroborating her account.

Corey Lewandowski was charged by the police in Jupiter, Florida, Tuesday and turned himself in that morning.

In a statement soon afterward, Trump said Lewandowski “is absolutely innocent of this charge.”

“He will enter a plea of not guilty and looks forward to his day in court,” the statement said. “He is completely confident that he will be exonerated.”

The video of the March 8 incident released by police in the south Florida city appears to show Lewandowski pulling and grabbing the reporter, Michelle Fields. The crowd had obscured the incident in previously released videos, according to Reuters.

Five days after the incident, Fields resigned from Breitbart, as did Ben Shapiro, the Orthodox Jewish editor at large, over the conservative news website’s refusal to stand behind its reporter. Breitbart went so far as to publish a story casting doubt on Fields’ account.

Washington Post reporter Ben Terris, who was standing next to Fields at the time of the incident, has corroborated her version of events.

Shapiro was a close friend of the late Breitbart founder, Andrew Breitbart, who was also Jewish.