Israeli teen uses non-lethal pepper-spray after his family surrounded by vicious Muslim mob over Sukkot – only to be arrested himself. 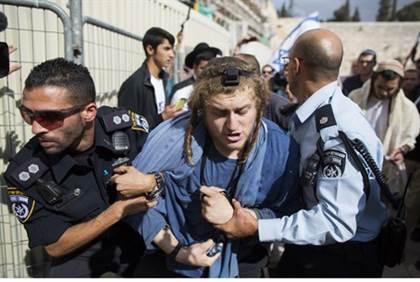 Jews are routinely arrested for praying, carrying religious materials, or Israeli flags at the Temple Mount.

A Jewish youth was arrested Tuesday near the Old City of Jerusalem’s Chain Gate, after spraying pepper spray at a group of Arabs who attacked him and his family.

Family members told Arutz Sheva that they had traveled to the capital for the Sukkot holiday, but some time after entering the Old City they found themselves surrounded by a large crowd of Arabs, who hurled insults and curses at them, as well as threats of violence.

Feeling threatened, the teen used the non-lethal pepper spray to distance the converging mob – and was promptly arrested by police.

The Honenu civil rights organization has dispatched a lawyer to represent the Jewish man, who is still in custody.

Elsewhere in Jerusalem, police arrested two Muslim women believed to have been involved in violence against Jews over the first day of the Sukkot holiday Monday.

One of the suspects is a resident of the Old City, while the other is from Kfar Ekev, just north of the Israeli capital.

Arab Muslims in Jerusalem have been targeting Jewish residents and security forces with violence for more than two weeks now, in a wave of attacks stoked by Islamist groups and PLO leaders.

Jewish residents say they are being forced to run an assault course of Arab mobs threatening them, hurling verbal abuse and in some cases physically attacking them. Even children are not spared: one particularly disturbing incident caught on camera Monday showed a father and his two young sons being harangued by Arabs, with one of the terrified children weeping uncontrollably.