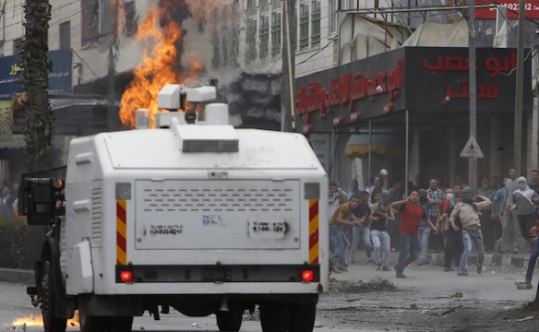 Five Israelis, including a 4-year-old girl, were hurt near the West Bank settlement of Beit El when a firebomb hit their family car.

The four-year-old sustained moderate injuries while the remaining four, her brother, mother, 12-year-old sister and father, were lightly injured in the attack Friday, Army Radio reported. All family members were hospitalized in Jerusalem for treatment. Security forces are searching for suspects in the attack.

Earlier on Friday, an Israeli soldier was lightly wounded in an apparent stabbing attack by [an Arab terrorist], who was also injured.

The incident occurred Friday morning at the Jaba’a roadblock south of Bethlehem, Army Radio reported. The [Arab], identified by the Maan news agency as 16-year-old Musab Muhammad Ghneimat from the town of Surif near Hebron, stabbed a soldier, who Ma’an reported was a Bedouin Israeli, while the soldier and several others were performing routine security checks at the roadblock, according to Army Radio.

The soldiers fired at the [terrorist], stopping him from carrying out further attacks. Ma’an reported he was wounded but did not immediately specify the severity of his injuries.

On Thursday, Hamas called for a “day of rage” the following day against Israelis — a term that often translates into violent riots and clashes with Israeli security forces.