Jews arrested on Temple Mount for the ‘crime’ of praying

Arab Muslims arrested after harassing Jewish visitors with threats of violence, while Jews arrested for the ‘crime’ of praying. 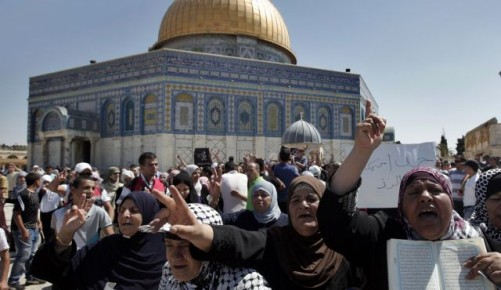 Israeli police said they arrested six Muslims and six Jews on Monday after a confrontation on the Temple Mount, which is a scene of frequent religious tensions.

“The [so-called] Palestinians were arrested while trying to prevent Jews from entering the Temple Mount,” police spokeswoman Luba Samri said.

The security forces then arrested four Jews who broke a rule forbidding them to pray there, and two other Jews for “causing disturbances,” she said.

Despite the fact that the Temple Mount is the holiest site in Judaism, Jewish visits are strictly regulated and Jews are forbidden from praying there due to threats of violence by Muslim groups.

Islamist groups have been conducting a campaign of harassment against Jewish visitors to the Mount – which also houses the Al Aqsa Mosque compound, built atop the ruins of two Jewish temples – with the stated goal of putting an end to all Jewish visits.

That strategy hasn’t worked though, with record numbers of Jewish pilgrims defying the abuse – which on occasion has turned violent – to visit their holiest site.

Jews are often arrested or expelled from the Mount if suspected of praying, despite numerous court rulings supporting the right to worship for all religious groups on the Temple Mount.