In the aftermath of Brian Williams’s demotion from NBC News to MSNBC, presumably NBC management felt that a fabulist would improve the quality of a network staffed by idiots, liars, and rascist, one would have thought that some interest would be shown in ensuring that the stories they run are actually grounded in fact. But one would be wrong. For instance: White Americans Are Biggest Terror Threat in U.S.: Study

White Americans are the biggest terror threat in the United States, according to a study by the New America Foundation. The Washington-based research organization did a review of “terror” attacks on US soil since Sept. 11, 2001 and found that most of them were carried out by radical anti-government groups or white supremacists.

Almost twice as many people have died in attacks by right-wing groups in America than have died in attacks by Muslim extremists. Of the 26 attacks since 9/11 that the group defined as terror, 19 were carried out by non-Muslims. Yet there are no white Americans languishing inside the prison camp at Guantanamo Bay. And there are no drones dropping bombs on gatherings of military-age males in the country’s lawless border regions.

This story is written by a high functioning imbecile called Peter Gelling, please visit him on twitter at @petergelling.

There are several parts to this story.

The author of the news story is an idiot.

There are no US citizens in Guantanamo because they can’t be sent there, though I’d give you odds that if you gave any inmate at the supermaxes at Florence, CO or Marion, IL the chance to play soccer, read, and get fat in the sun at Guantanamo rather than spend 23 hours a day in solitary I’m pretty sure you’d get volunteers out the wazoo. I was not aware public gatherings of military age males anywhere in the world resulted in drone strikes. And the only lawless border regions in America aren’t populated by white males. What this assclown is doing, and as I’ve noticed him he has succeeded, is trolling the internet for traffic to his crappy little outhouse of a website.

The study doesn’t say white Americans are a terror threat.

The “study”, which is about two html pages deep, concludes that more people have been killed in the United States by white extremists (whatever that means, and why limit the study to whites and not blacks given the assassination of two NYPD officers by a black extremist? Okay, that was a rhetorical question, we know the answer.) The study concludes that since 2001, 26 persons have been killed by Islamic terrorist and 48 have been killed by “white extremists.” From this we are to conclude, presumably, that Bubba with the now-nearly-illegal Confederate flag on his pick up is a bigger threat than ISIS.

The study’s data does not support its conclusions.

While more people have been killed, arguably, by “extremists,” however the study cares to identify them, the actual data shows something different. From the report 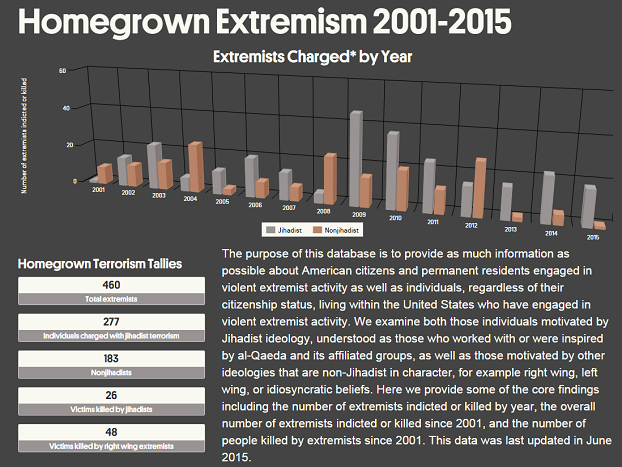 The underlying data is suspect as well. The FBI reported that it had charged 578 persons with Islamic terrorism related offenses as of the end of 2011, this is nearly double the number this study includes for a longer period of time. RAND reports the overwhelming majority of all non-Islamic-related domestic terrorism cases have been associated with Earth or Animal Liberation Fronts. RAND documents 60 attacks by eco-terrorists between 9-11-2001 and 12-31-2009 (last data in the database). None of these are included in this report. Whether this is just sloppy methodology or dishonesty is hard to tell given the tenor of the report.

These are what the FBI considers to be the major terrorism cases since 2011. Check the names.

The report doesn’t do an apples to apples comparison. For instance, it doesn’t compare all arrests by members of extremist organizations. If it did so, it would pick up murders by persons holding Islamic terrorist sympathies, not simply those actually arrested for terrorism. For instance, from last year:

Authorities have arrested Ali Muhammad Brown in New Jersey for executing two homosexuals in Seattle. He is reportedly a radical Muslim and received jihadist training in California in April.

It is unclear who trained Brown, where it took place and what it consisted of. All that is publicly known about his ideological path is that he is accused of the premeditated murder of two homosexuals on June 1.

This is clearly an example of a Muslim extremist acting on his beliefs but it is missing from the report because he isn’t a “jihadi,” whatever the hell that it is. In ten minutes one can find enough cases of Islamic extremists killing people to more than balance the scales but that would not be creating media buzz and cash contributions.

By the same token, any crime committed by a person with even risible ties to an equally risible “right wing extremist” (note to authors: Nazism is LEFT WING extremism, National Socialist Workers Party should provide ample clues). Some of the examples seem to have made their way onto the list for no other reason than a disingenuous effort to increase the body count. For instance:

An out-of-work truck driver smiled Monday as he pleaded guilty to killing two people and wounding six others at a Tennessee church last summer because he hated its liberal politics.

I mean WTF? How do you even categorize this type of shooting. This type of case reduces the data used in the study to a pretty useless pile of steaming dog dung. What they are actually counting is murders by white people who believe in things they don’t agree with. No matter the virtue of such a bean count, it is not a methodology if you can’t describe what you are counting.

This group seems to be trying to capitalize on the shootings in Charleston, SC, to plug their really juvenile attempt at data collection, data analysis, and report writing. There seems little chance that they will ever rival the infamous hate group, the Southern Poverty Law Center which incited an attack by left wing extemist, Floyd Lee Corkins on the Family Research Council. This seems to be a follow on to the furor over the Confederate flag though there is no evidence that any of the people in the report had and affinity for a return of the Confederacy.

I don’t blame @petergelling for clickbaiting his way to a few extra advertising dollars by shamelessly misrepresenting a semi-bogus report. Its what he has to do to keep the lights turned on at his website and to keep himself in hand lotion and Kleenexes. I don’t blame Peter Bergen @peterbergencnn or Jennifer Rowland @jrowland4 who authored this report. I mean shills gotta shill if you want to keep the grant money coming. If that entails sloppy work, deception and dishonesty, well, as Omar Little would say, “All in the game, yo, all in the game.”

This is simply an ongoing effort by the American left to excuse Islamic terrorism and to establish a link between anyone they disagree with politically and violence. It is lapped up the way a dog eats its own vomit by the news media because the politics of these people are the politics of the newsrooms in this country.