Pathetic: Trump fans say they’ll forgive him for not building the wall 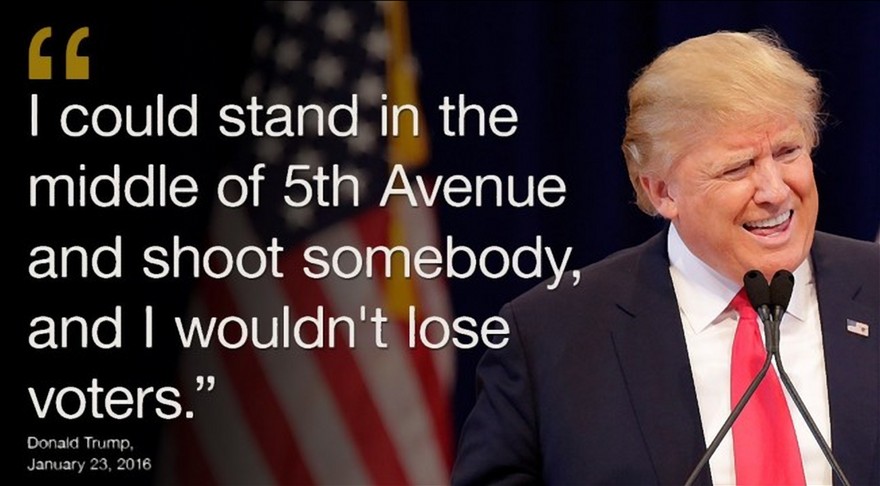 Trump was right when he said “I could … shoot somebody and I wouldn’t lose voters.” No matter what he does, they’ll just make excuses and agree with whatever Trump says.

President Trump might not pay the expected price if he fails to build a wall on the southern border, if some of his biggest fans are to be believed.

“Illegal immigration is probably one of my biggest concerns,” Crystal Hunt, a former Army linguist, said as she entered Trump’s rally marking his 100 days in office. “If the wall doesn’t get built, I think we can still enforce it in other ways … I probably really don’t care if the wall is built.”

That attitude could be tested in coming weeks and months, as Democrats are determined to block funding for wall construction. Trump’s team is also encountering the practical difficulties of construction — Interior Secretary Ryan Zinke doesn’t want to “cede the river” by building it on the American side of the Rio Grande, for instance — although Trump repeated his pledge at the rally.

“Don’t even worry about it,” he told the audience, which exuberantly chanted “build the wall” at various points in the event. “Go home, go to sleep. Rest assured.”

That came one day after Trump acknowledged to the National Rifle Association that “certain big rivers” and other topography render the wall unnecessary in some places. And for all the wall chants, it wasn’t hard to find supporters who hedged when talking about the issue on their own.

“The wall should probably be built; we’ve got to keep the drugs out of this country,” said Carla Baum, a local Trump supporter who volunteered at the rally. “There are some people who are really so staunch about it, but I believe that there are other things that money needs to be allocated to that are more important … we just have to beef up the security down there and we have to have cooperation from Mexico as well, and from down in Central America, because they’re coming from everywhere.”

Baum’s companion, Lana Fellows, is one of those who is “so staunch” about the wall — but even she displayed a forgiving attitude after her initial remarks. “I would be very upset, because that was one of his big campaign promises; from the very first speech, he talked about building a wall,” she said. “The Democrats have been obstructionists with everything, so, no I will not blame him. He can only do so much.”