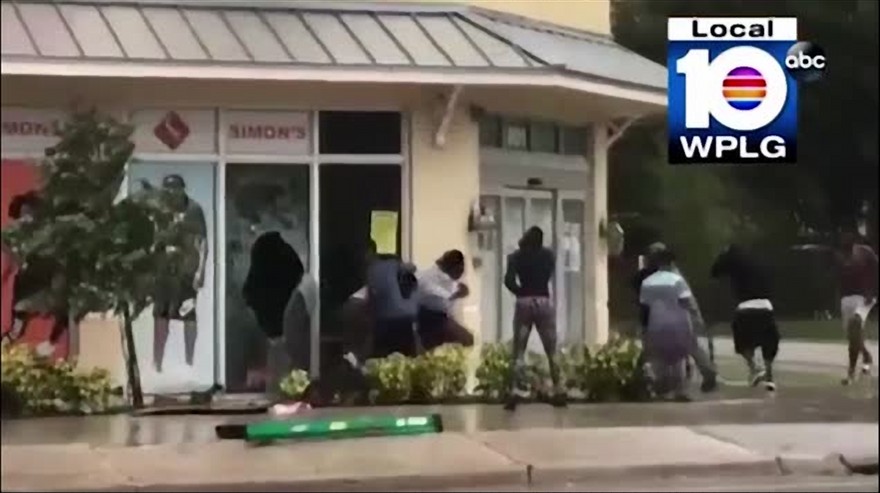 And no one wants to mention it because they don’t want to be called “racists” for telling the truth.

In anticipation of bad behavior, there was preemptive excuse-making all on social media the last few days about how we should expect to see the poor and defenseless scrounging for food and supplies they only way they could, in order to keep their families alive. Because rich people are mean and want you to drown.

The reality of looting reports out of Florida is less heroic.

Local 10 cameras caught a group breaking into the Simon’s Sportswear on Sunrise Blvd. and Powerline Road.

The group of about 8-9 [blacks] broke through the front window and were seen walking in and then walking out with stolen items.

The group then began looting a Footlocker and CashAmerica Pawn Store in the same area.

Hours later, the Fort Lauderdale Police Department tweeted that they had caught the criminals.

Now, this is only the first “caught on tape” instance of looting, but it’s telling the first isn’t a grocery store as predicted. And surely there will be stories of people desperate for supplies.

HOWEVER, this does go directly against the noble narrative we are fed by liberal media. That there really are no criminals, just disadvantaged people looking to get by.

These folks were looking to get shoes. And they won’t be the only ones busted stealing in the storm and aftermath. Sorry, media.