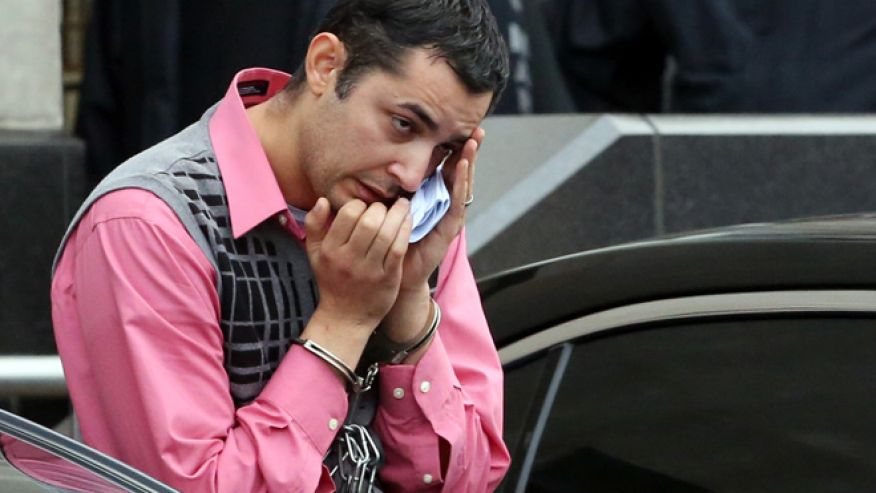 A Naval engineer is facing charges that he gave an FBI undercover agent posing as an Egyptian intelligence officer secret documents about the new Gerald R. Ford aircraft carrier while discussing how to sink the vessel with a missile.

Mostafa Ahmed Awwad, 35, of Yorktown, Va., was arrested Friday on an FBI affidavit that reads like it came from a Tom Clancy novel.

Federal prosecutors in Virginia say that during his conversations with the undercover, Awwad arranged to use a dead-drop location along a secluded hiking trail to pass secrets about the Ford, which is being built in Virginia for delivery to the Navy in 2016.

The affidavit says that at a hotel meeting on Oct. 9 Awwad gave the undercover drawings of the aircraft carrier that he said were top secret. During the meeting, “Awwad discussed where to strike the vessel with a missile in order to sink it,” the affidavit says.

The FBI undercover was posing as an Egyptian spy named “Yousef” and spoke to Awwad in Arabic.

The Virginian Pilot said Saturday that Awwad cried as he was led into the courtroom for a brief hearing before a federal magistrate judge in Norfolk. He wore a pink collared shirts, sweater vest and tan pants, the paper said.

The judge ordered Awwad detained until a hearing Wednesday.

The indictment accuses Awwad of two counts of attempted exportation of defense articles and technical data. Each count is punishable by 20 years in prison.

The affidavit says Awwad was born in Saudia Arabia and married a U.S. citizen in Cairo in 2007. After his marriage he took steps to become an American citizen.

The court papers also say the Navy hired Awwad to work in the Norfolk Naval Shipyard’s nuclear engineering and planning department in February and that he got a security clearance in August.

The FBI sting began in September when the undercover contacted Awwad. The court papers do not say why Awwad became a target.

During their first meeting in a park in Hampton, Va., Awwad explained to “Yousef” that he intended to use his position to obtain military technology for use by the Egyptian government, including but not limited to, the designs of the USS Gerald Ford nuclear aircraft carrier.

“Awwad agreed to conduct clandestine communications with the undercover FBI agent by email and unattributable telephones and to conduct ‘dead drops’ in a concealed location in the park,” the Justice Department said in a press release, cited by the Navy Times.

At the Oct. 9 meeting Awwad asked for $1,500 to buy a tiny camera to enable him to photograph restricted material around the shipyard, according to the affidavit.

On Oct. 23, Awwad retrieved $3,000 in cash left at the dead-drop location. He left behind a container with an external hard drive and two passport photos. The FBI later collected the containers.

The day after Thanksgiving Awwad was observed in his Navy office holding what appeared to be aircraft design schematics which he placed on the floor and photographed.

The Pilot said the USS Ford is the lead ship in the Navy’s new class of carriers. The Ford stands 25 stories high and is three football fields long.

Retired rear admiral Fred Metz, head of the Navy’s carrier and air station program until 1991, told the paper its bad enough for the schematics of any Navy vessel to be given away.

“But it’s worse to give away the Ford’s,” he said. “There is a whole lot of new technology on it we haven’t seen before.”