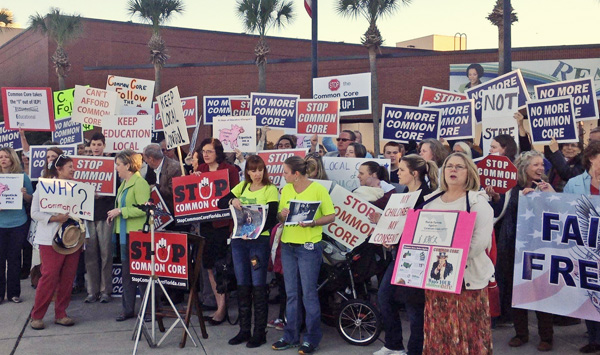 Parents in South Carolina who are part of a nationwide revolt against Common Core say they are being threatened with “criminal accountability” if they prevent their children from taking the tests required by the controversial educational-standards program.

In addition, Hood said Carpentier warned that groups that encourage parents to refuse the Common Core-aligned tests could be charged with aiding and abetting a crime.

A memo from South Carolina state education Superintendent Molly Spearman to districts bluntly declared there is “no statutory provision for parents to opt their children out of testing.”

Dino Teppara of the state agency’s public information office denied any threats were made and also denied that Carpentier said parents can be held criminally liable if they remove their children from school on testing days, insisting she “simply noted the truancy provisions in state statutes.”

In any case, Education Secretary Arne Duncan has clearly warned that if states don’t fix the problem of parents opting out, the federal government will “have an obligation to step in.”

Despite the insistence of supporters that Common Core is a state-driven education program, last week Duncan criticized parents who opt out of testing, charging they are hurting minorities and the disabled.

National Review Online reported Duncan’s position is that in the past, English language learners, students in special education and racial minorities were “swept under the rug.”

“Folks in the civil rights community, folks in the disability community, they want their kids being assessed. They want to know if they are making progress or growth,” he said.

Resistance to Common Core, which has been adopted by 46 states, is building.

In Arkansas, a mother confronted the Arkansas State Board of Education about the program’s absurdly high demands, a high-school honors student in New Jersey blasted the testing publicly and an award-winning teacher in Ohio told a stunned audience she’s quitting because of Common Core.

Commenting on the resistance in New York state, where 184,000 of 1.1 million eligible students refused to take Common Core English exams earlier this month, renowned educator Diane Ravitch asked, “What if they threw a test and nobody took it? New York is about to find out,” the Long Island Press reported.

Common Core opponents have leaked a copy of an examination, and a number of states are formally taking action to withdraw from the requirements.

“Crimes of the Educators” reveals how the architects of America’s public school disaster implemented a plan to socialize the U.S. by knowingly and willingly dumbing down the population, a mission now closer to success than ever as the Obama administration works relentlessly to nationalize K-12 schooling with Common Core.

He has no sympathy for state and district school officials fretting over funding-cut threats from the government.

“We got the sob story from one of our 3 kids schools that we kept our kids home from [testing] today that we could cause them to lose federal money. Maybe you should have thought about that before you took the money in the first place!! See what happens when you sleep with the devil.”

National Review Online pointed out that in Colorado, which voted for Obama twice, the state board approved a resolution that districts cannot be punished for test-taking rates, and lawmakers were working on a bill to protect parents who opt their children out of such tests.

The Home School Legal Defense Association noted Duncan did not clarify what he meant by “stepping in.”

“Duncan’s statements reflect a growing pressure on education bureaucrats to keep states locked into the Common Core,” HSLDA said. “Students nationwide are still opting out of voluntary benchmark assessments, which are meant to prepare them for all-day Common Core tests.”

HSLDA said it is “concerned that federal officials will again resort to financial incentives – or threaten to withhold funding – to coerce students into participating in these tests.”

“As demonstrated empirically by 2009′s ‘Race to the Top’ grants, state governments have a track record of prioritizing federal funds over their own sovereignty. Lured by the promise of funding, many cash-strapped states could not or would not resist the offer of billions of dollars in exchange for what seemed, at the time, a small sacrifice: adhering to a set of K-12 learning standards.”

“Whenever the government threatens to ‘step in,’ the right of parents to be involved in their children’s education is bound to suffer,” the group’s report said.

Commentator Alex Newman, co-author of a new book, “Crimes of the Educators: How Utopians Are Using Government Schools to Destroy America’s Children,” with Sam Blumenfeld, wrote recently that the Obama administration “has made no secret of its desire to control your children’s education from ‘cradle to career,’ as Obama Education Secretary Arne Duncan often puts it.”

“Top officials have also been very specific in terms of the radical ideas and values they plan to hammer into the pliable minds of America’s children.”

The U.S. Department of Education, he noted, says it is “taking a leadership role in the work of educating the next generation of green citizens and preparing them to contribute to the workforce through green jobs.”

Duncan boasted in a 2010 speech to a “sustainability” summit.

“Do you send your children to school to get indoctrinated as ‘green citizens’ so they can have ‘green jobs’? If you are like most parents, the answer is no,” Newman said.

“But that matters little to the Obama administration and its extremist allies in ‘education reform’ – the United Nations, crony capitalists hoping to profit, population-control zealot and Common Core financier Bill Gates, and the whole corrupt educational establishment. Using taxpayer-funded bribes, Obama’s Education Department has been very successful so far in imposing its controversial ‘Common Core’ national standards across most of America.”