Donald Trump is no fan of the First Amendment right to Freedom of the Press. Throughout his candidacy and continuing throughout his presidency, Trump has played the worn-out “Fake News” card against anyone who reports stories that fail to massage his massive ego. 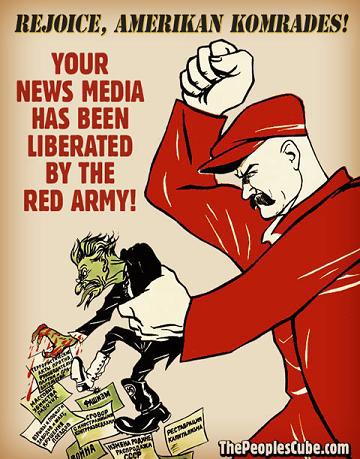 Declaring them to be “the enemy of the people,” Trump has threatened to silence his critics in the press through the use of libel lawsuits and by revoking the broadcast licenses of major networks, while at the same time giving his Trump Pravda buddies at FOX News and Breitbart praise for their cultish reporting.

While this disturbing behavior by the man sworn to protect and defend our Constitutional rights has been disconcerting, Trump’s FCC has taken it up a level following two recent decisions.

In April, under the leadership of the new chairman chosen by Trump, the FCC reinstated an old rule that paved the way for a $3.9 billion TV merger between Sinclair and Tribune. It also allows for TV networks to own enough stations to reach over 70% of US households.

Yesterday, the FCC’s second decision eliminated the requirement for TV stations to maintain local studios in the markets where they are licensed, an action that opens the door for local news to be moved to places like New York City and Washington DC.

Combined, these decisions will make it possible for Sinclair to control TV news in approximately 72 percent of US households. Besides the fact that this consolidation runs in direct opposition to the FCC’s mission of promoting competition, diversity, and locality of the public airwaves, there is a conflict of interest involved in these recent events because Sinclair has close ties to Trump, Steve Bannon, and Breitbart News.

Sounds like the perfect way for Trump to control the message and the messenger. Doesn’t it?

Did Trump and Bannon know about or orchestrate these changes? I guess we’ll find out. But to have so much of the media under the control of one entity provides a direct threat to the First Amendment and brings us one step closer to a government-run press that will no longer be free, as Donald Trump once stated, to “write whatever they want.”

An idea Trump apparently approves of and tyrants have loved for centuries.