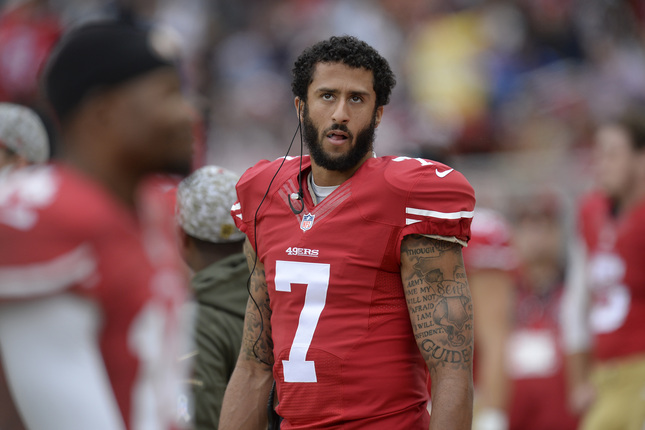 San Francisco 49ers quarterback Colin Kaepernick remained seated on the bench during the playing of “The Star-Spangled Banner” at the beginning of Friday night’s loss to the Green Bay Packers, while the rest of his teammates and coaches stood, according to CBS Sports.

Why? Well, it wasn’t because he was tired or injured. After the game he told NFL.com,

“I am not going to stand up to show pride in a flag for a country that oppresses black people and people of color. To me, this is bigger than football and it would be selfish on my part to look the other way. There are bodies in the street and people getting paid leave and getting away with murder.”

This is disgusting beyond words. A country that oppresses black people? Someone remind this ungrateful fool that this oppressor nation voted in a black President twice (and would probably vote him in again if not for the 22nd Amendment to that pesky Constitution). Please also remind him that he, a black man, has the rare privilege of leading a National Football League team to the tune of $114 million over the next 6 years. If that’s oppression, sign me up.

He did not inform anyone on the team of his intention beforehand:

“This is not something that I am going to run by anybody. I am not looking for approval. I have to stand up for people that are oppressed. … If they take football away, my endorsements from me, I know that I stood up for what is right.”

Not a bad idea. Let’s take away his endorsements and his quarterbacking position and his salary. Let’s relieve him of all that unbearable oppression.

The 49ers responded with a statement to Pro Football Talk:

The national anthem is and always will be a special part of the pre-game ceremony. It is an opportunity to honor our country and reflect on the great liberties we are afforded as its citizens. In respecting such American principles as freedom of religion and freedom of expression, we recognize the right of an individual to choose to participate, or not, in our celebration of the national anthem.

Yes, of course he has that right. And Americans have the right to turn their back on him for his choice. His race-mongering idiocy and willful ignorance about civil rights in America are unconscionable and dangerous at time in which the Black Lives Matter (BLM) terrorists are successfully pushing for a race war. If Kaepernick truly cared about black people, he would stand FOR America and AGAINST the BLM agitators. He would stand as a proud symbol that blacks in America are free to do and become anything they wish, including wealthy and powerful. He would stand as yet another American role model for young blacks who can aspire to something other than joining a gang or rapping about killing cops.

But those black lives don’t matter to Black Lives Matter, and apparently not to Kaepernick either.