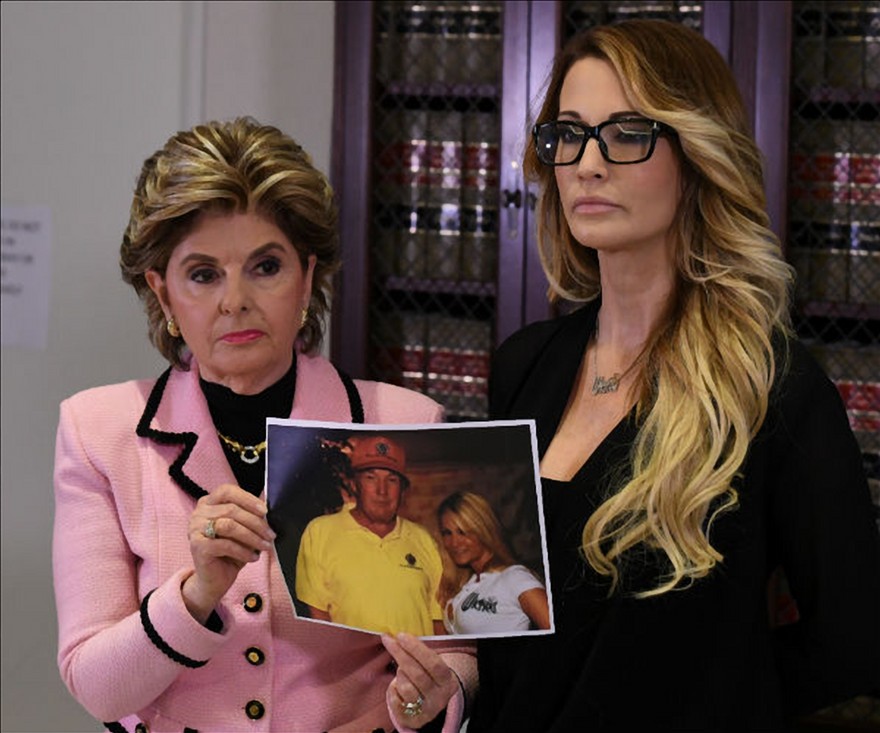 An eleventh woman came forward Saturday to allege that Donald Trump assaulted her — in 2006 at his golf resort in Nevada — and that someone on his behalf offered her $10,000 to have sex with the Republican presidential nominee and fly on his private plane.

Jessica Drake, 42, who works in the adult film industry as a performer and director, said that she was at a golf tournament at Trump’s resort in Lake Tahoe working in a booth for Wicked Pictures, to whom she has been contracted since 2003.

Drake, who held up a photograph with Trump, disclosed the alleged incident at the Los Angeles office of attorney Gloria Allred — and she said she is now representing three of the 11 women who have accused Trump of inappropriate sexual behavior in recent weeks.

The Trump campaign immediately slammed Drake’s allegations as “totally false and ridiculous,” adding that “the picture is one of thousands taken out of respect for people asking to have their picture taken with Mr. Trump.

“Mr. Trump does not know this person, does not remember this person and would have no interest in ever knowing her,” the campaign said in a statement.

Trump has denied all of the claims of his accusers — and he vowed in a speech earlier Saturday in Pennsylvania that he would sue “every one” of the women after next month’s election.

He also charged Hillary Clinton’s campaign and the Democratic Party with orchestrating the allegations, including Drake’s.

At the news conference, Drake said that she was disclosing the alleged assault for the first time.

“I understand I may be called a liar or an opportunist, but I will risk that in order to stand in solidarity with women who share similar accounts that span many, many years,” she said, NBC News reports.

Drake alleged that Trump invited her up to his penthouse suite — and she accepted, taking two other women with her.

Once inside, she said Trump — who allegedly was wearing pajamas and whose bodyguard was present — grabbed and kissed the women without their consent.

Feeling uncomfortable, Drake said they left and returned to their rooms.

A short time later, she alleged that she received a call from a Trump assistant, asking her to return to his suite. She refused, telling reporters that she was not comfortable with doing that.

Drake said she allegedly received a call from Trump himself, asking her to have sex with him in the suite.

She said she again declined.

Drake then claimed that another call came from an assistant offering her $10,000. She refused.

However, the requests continued — even with Trump offering her the use of his private jet to return to Los Angeles afterward, she claimed.

According to several online biographies, Drake has performed in 355 adult films and has directed 14 of them. She also has appeared on Playboy TV and in magazines.

“I am choosing to share my personal exchange in light of the recently-released tapes in order to lend my voice, my strength and my support to the other women who are coming forward,” Drake told reporters.

In its response, the Trump campaign’s statement also linked Drake’s coming forward to the Clinton camp.

“This is just another attempt by the Clinton campaign to defame a candidate who just today is number one in three different polls.”

The statement then referred to undercover videos released this week by Project Veritas showing tactics to incite violence at Trump rallies by former Democratic operatives.

“Anyone who would pay thugs to incite violence at a rally against American citizens …will stop at nothing,” the campaign said. “Just another example of the Clinton campaign trying to rig the election.”

Before Drake spoke, Allred slammed Trump’s threat to sue his accusers in his speech at Gettysburg.

“Be careful what you wish for, Mr. Trump,” she said. “If you sue the accusers, the lawyers who represent these women will have the opportunity to depose you.”

Allred cautioned that “the women’s lawyers will welcome the opportunity to question you under oath.”

In taking questions from reporters, Allred said that despite Drake’s work in the adult film industry, “it’s very clear that consent is required.

“In her occupation, she consents to do what she does,” she said.

When Allred was asked how she would proceed, she responded: “The next move is Mr. Trump’s.”