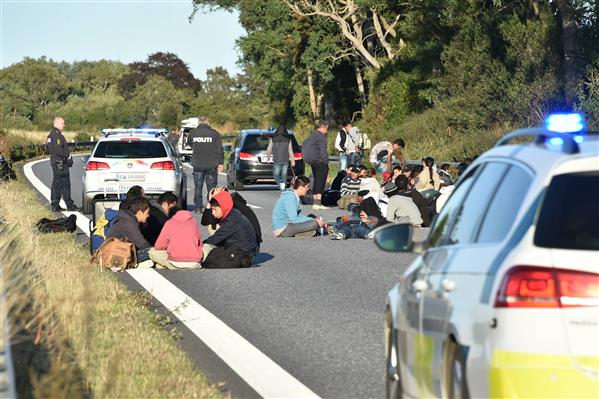 The sudden and unexpected wave of economic refugees from Syria and Iraq appears to have similarities to the wave of young economic refugees fleeing Central America who started flooding our borders last year with several governments, including our own, as enablers and financers of forced settlement.

When this administration, bent on changing the face and demographics of America, granted amnesty under Obama’s Deferred Action for Childhood Arrivals (DACA) to 2-3 million illegals, news spread through Central America, which resulted in a massive influx of unaccompanied minors and adult young men. These minors and adults brought in diseases like the enterovirus 68 found in Central America, a polio-like respiratory illness that has caused deaths among U.S. school children. Lice and tuberculosis were found among adults and children.

The wave was organized then, busing and flying mostly young men, not children, into various locations around the country where Catholic, Lutheran, and Baptist organizations were paid millions of dollars in grants to facilitate and force small communities to take in these “children,” enrolling those who were children in school even though they spoke no English nor Spanish, only an indigenous dialect that nobody seemed to understand. Same church groups taught adults how to apply for welfare benefits for themselves and for the minor children immediately.

The “refugees” from the Middle East appear healthy, well dressed, well organized, calm, and carrying one average size backpack like tourists on a weekend jaunt. We know this from various MSM videos and photographs.

This mass migration of Muslims around the world has a purpose, as an ISIS operative revealed in February that the Islamic State takes advantage of the “refugee crisis” to “form a fifth column of Muslim fighters inside western nations” in which they claim 4,000 ISIS terrorists are already in place, having been smuggled among the presumed refugees.  Robert Spencer wrote on September 4 in Front Page Magazine that “This is no longer just a ‘refugee crisis.’ This is a hijrah.”

“Hijrah is the Islamic doctrine of migration, a form of stealth jihad.” Paraphrasing the Quran (4:100), Spencer wrote that “To emigrate in the cause of Allah – that is to move to a new land in order to bring Islam there, is considered in Islam to be a highly meritorious act.” ISIS wants to have a Caliphate in the entire world.

According to Leo Hohmann, “1.5 million Muslims have migrated into Turkey alone, with millions more refugees in Lebanon, Jordan, and outside their homes in Syria itself.” WND reported that Christians are hiding in churches and in homes, afraid to go to the U.N. refugee camps which are run mostly by Muslims.

These refugees are going to Sweden and Germany for asylum via Hungary and Romania. The Hungarian Prime Minister, Victor Orban, highly criticized by all liberals in the West, chose to block the Muslim migrants in order to maintain Hungary’s Christian heritage. Clare Lopez, Middle East analyst for the Center for Security Policy, said that more leaders should be as “astute” as Orban who wants to preserve national sovereignty currently “under concerted attack by the forces of the global jihad movement.” Both Putin of Russia and Erdogan of Turkey blame the West “for creating the refugee crisis in the first place through it fomenting civil war against Syrian leader Bashir al-Assad.”

Presalibera.net published numerous photographs and a video, reporting that on September 1, 2015, a Romanian tourist returning from a short vacation, boarded a ferry boat, Nissos Rodos, on the Greek island of Limnos, in the port of Myrna, with the final destination in Kavala, continental Greece. Hundreds of Arabic-speaking people were on board, two-thirds males between 20-30 and the rest women of similar age with small children. These passengers had boarded in Chios, Samos, and Mytilini (Lesvos) and the ferry staff referred to them as “refugees.”

Refugees are usually haggard, sad, frightened, hungry, poorly, and dirtily dressed, carrying luggage according to their physical abilities. But these refugees were different, reported the accidental tourist; they were happy, relaxed, well dressed, clean, well fed, joking and laughing in groups. When they noticed they were being photographed, he reported, some hid their faces, others looked at him directly and smiled, giving him the two-finger sign for victory. There was no tension as if they knew exactly what would follow, “they had the assurance of an immediate future without surprises.”

“Without exception, they were well dressed, some had designer clothes on, with new and expensive shoes, some elegant designer shoes, and some women even wore low heels.” On board, during the 3 ½ hour journey, the curious passengers were segregated in groups, some sitting inside in comfortable chairs and others outside directly on the deck or in deck chairs.

Alexandru Matei described their luggage as not reflecting their condition of “refugees.” All carried an average backpack with no reserves of food, water, or any other necessities for an unexpected long voyage or passage as if someone else was going to take care of them. They were carrying, Matei said, as much as he would take with him on an outing with his kids in the park, not for a 3,500 km journey from Syria and Iraq to Germany.

Only two of the “refugees” admitted to speaking English and allowed themselves to be interviewed by Alexandru Matei.  They were [Israeli Arabs], Iraqi, and Syrian Muslims headed to Germany which agreed to take them in as immigrants. From Syria and Iraq they crossed into Turkey were they were taken by buses with concealed windows to the shore were boats took them in groups of 50 and crossed the sea into Greece in four hours. They were then taken by ship to Kavala, then by bus to Salonic, then to Skopje, and then to Germany.

Matei asked them how they got into Turkey. If he tried to cross the Turkish border without a visa, he would have been arrested, he said. These “refugees” had entry papers as tourists. How did they get into Greece, he asked them. We entered by boat without a visa or permit. With the statue of “refugees” they could enter any other country along the way.

Who organized so many people, asked Matei. Are there human smugglers with you? No, they said. Matei wondered how so many people, on their own volition, could get together in such large numbers, so thinly dressed, without food and water, and assemble to trek together in the same direction, 3,500 km without any prior organization.

Why flee now? The initial waves of refugees left a long time ago, armed conflicts have been taking place in Syria for 4 years, 24 years in Iraq, and 70 years in Gaza, it is not something new that took you by surprise. Matei continued, when he fled communism 30 years ago, refugees left individually or in families not in such large groups.

We have no future, everything is destroyed, lamented a 27-year old Iraqi engineer who was unable to find a job for five years. “We lost 4 million Iraqis in the first years of war,” he said. “We have no homes, no water, no electricity, no jobs, politicians are corrupt, 5 percent of people are intelligent, 95 percent are idiots who shoot each other all day. “ Who caused all of this, asked Matei. “Some politicians who want to enrich themselves and the American dictatorship,” the Iraqi engineer answered.
Getting off the boat, the “refugees” were orderly, relaxed, calm, and grouped themselves while a leader was talking to them. They walked to the bus station in Kavala where, after getting tickets, they boarded buses that seemed to expect them. Only 6-8 policemen on bikes were on hand to supervise this peaceful and highly organized transfer.

Alexandru Matei had one question he wanted to ask of the young women with children, “How do you move as a mother with your child in a stroller and just one backpack, across seas and across countries, on your way to a foreign country 3,500 km away, without even a bottle of water with you?”

This accidental tourist captured the essence of Angela Merkel and Francois Hollande’s failed liberal policies and the alleged understanding they have with Greece and Tukey to allow these economic immigrants to move freely into Europe instead of fighting the problem of such illegal immigration onslaught. “The European authorities are inefficient and incompetent on purpose. We are in a full-blown crisis but the European authorities are not meeting until September 14.”

Nobody wants to stop the daily invasion of thousands of illegals into Europe. The Turkish President said that the “Europeans have transformed the Mediterranean into a cemetery.”