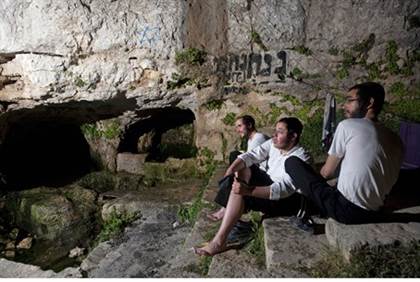 Israel’s Civil Administration announced its intentions to renovate the Tomb of Samuel, the traditional burial site of biblical Hebrew prophet Samuel (Shmuel), which is located in the Arab village Nabi Samwil in Judea.

Samuel’s Tomb, situated atop a steep hill 1.3 kilometers north of Jerusalem neighborhood Ramot, has some severe safety problems. These include very steep stairs to reach the underground synagogue at the site, as well as poor lighting.

Arabs have responded angrily to the move to improve the Jewish holy place, calling it “racist persecution.”

Unlike other Jewish holy sites in Israel, whose Jewish ties Islamists usually deny, Muslims do not dispute the site is Samuel’s tomb; they simply consider Samuel a Muslim prophet – despite the fact that he is not mentioned in the Koran. The name of the tomb in Arabic is an-Nabi Samu’il.

On the site of the tomb is a building containing a large mosque built in the 18th century. The mosque was formerly a church.

Adeis added that the site is purely an Islamic one which Israelis are trying to “distort” by falsifying history, geography, and culture.

The cleric said he was making every effort to return Samuel’s Tomb to the ownership of the Islamic Waqf, and that he plans to go to all the world’s cultural and religious institutions to complain of “this new assault on the sensibilities of Muslim believers in [so-called] Palestine and throughout the world.”

In 2007, the Tomb of Samuel was vandalized by a gang of local Arabs who broke into the site’s small synagogue.

A cabinet with religious articles and prayer-books was pried open and the books torn and destroyed. Additionally, the iron door of the ark inside the tomb was broken into, its contents stolen and the decorations and pillars surrounding the ark smashed.

Samuel’s Tomb has also suffered from neglect, as this is the first planned renovation in several decades.