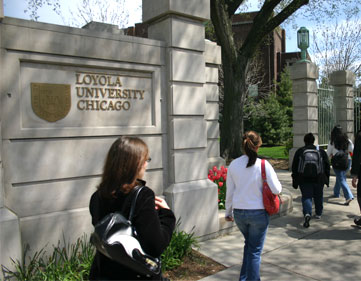 The Student Government of Loyola University in Chicago narrowly passed a resolution to divest from companies that do business with Israel.

The vote on March 26 was 15 to 15, with two abstentions. The speaker of the student senate broke the tie with a vote in favor of the resolution.

More than an hour of public debate and three hours of debate by student senators preceded the vote, according to the university’s student newspaper, the Loyola Phoenix. The voting was anonymous due to fear of reprisals.

The companies named in the resolution are Caterpillar, United Technologies Co., Raytheon, and Valero.

The tie-breaking vote came from an intern for the Council on American-Islamic Relations, or CAIR, the College Fix news website reported. The CAIR Chicago chapter assisted the Loyola Students for “Justice in Palestine” chapter, which sponsored the resolution, after it was temporarily suspended from holding campus activities following the harassment of a Jewish group on campus.

The Loyola Student Government passed a divestment resolution in March 2014, but the resolution was vetoed by the student body president. The university also issued a statement at the time that it would not adopt the student’s divestment proposal if passed.