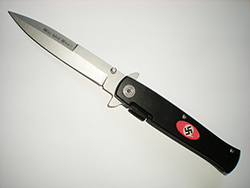 One of many swastika-emblazoned knives sold by Amazon

All symbols of the Confederacy are rapidly disappearing from stores, websites and the public square in the wake of last week’s racially charged shooting in a Charleston, S.C., church, but the purge of some allegedly hateful icons has spared memorabilia linked to some of history’s most infamous mass murderers, some critics are charging.

Amazon.com has now banned all Confederate battle flag items from being sold on its site, but the massive e-commerce site continues to allow the sale of dozens of apparel items featuring communist mass murderers such as Vladimir Lenin, Joseph Stalin and Che Guevara, prompting some to accuse the site and others banning Confederate imagery of hypocrisy.

“If Amazon is removing the Confederate flag from its offerings, the logical and principled decision is to stop selling any promotional material, including T-shirts, of Che Guevara or any mass killer.”

“If Amazon is removing the Confederate flag from its offerings, the logical and principled decision is to stop selling any promotional material, including T-shirts, of Che Guevara or any mass killer,” said Maria Werlau, executive director of the Free Society Project. “It is very painful particularly to the loved ones of Guevara’s victims as well as offensive to the Cuban people who continue to suffer repression and abhorrent human rights’ abuses by the system he helped create and direct.”

Although Guevara is a popular image on T-shirts, he executed many non-communists in Cuba. At one point he admitted in a speech to communist officials: “We executed many people by ﬁring squad without knowing if they were fully guilty. At times, the Revolution cannot stop to conduct much investigation; it has the obligation to triumph.”

Others also take offense to items that idolize communists.

“It’s an insult to the more than 100 million people who have been killed… at the hands of communist governments,” Marion Smith, executive director of the Victims of Communism Memorial Foundation, told FoxNews.com.

Amazon.com did not respond to a request for comment. Other sites have been accused of similar hypocrisy. Apple Computer has now banned all apps that show a Confederate flag, regardless of the context, but continues to allow dozens of apps that involve the Soviet Union. One Apple app called “15 Soviet” promises in its description to inform users of “the history of one of the greatest states of the century – the USSR.”

There are also public displays of communist leaders on private property around the country. Seattle is home to a 16-foot bronze statue of Lenin, the founder of the Soviet Union. In New York City, a large statue of Lenin looks out over the city from atop a luxury apartment complex.

“If it was a statue of Hitler, it wouldn’t be there. It’s just another example of the double standard in this country,” he said.

Some defend the statues, saying they are art and not necessarily supportive of communism.

“[The statue] is very controversial and it is that thought provoking spirit that is most enjoyed by [people who live here],” Jessica Vets, executive director of the Fremont Chamber of Commerce, where the statue is located, told FoxNews.com.

“History is less likely to repeat itself with thought-provoking dialog and historical facts,” she added.

In terms of historical facts, how bad were Lenin and the others? Lenin’s brutality is especially clear in an order of his from 1918, in which he directed his subordinates to kill middle-class farmers (derisively called “kulaks”) who opposed communist reforms.

“You need to hang… at least 100 notorious kulaks, the rich, and the bloodsuckers… This needs to be accomplished in such a way that people for hundreds of miles around will see, tremble, know and scream out: let’s choke and strangle those blood-sucking kulaks,” he said to his subordinates.

But Lenin was considered a moderate compared to Joseph Stalin, who ruled shortly after him. Nobody knows how many Stalin killed, but estimates range between 20 and 30 million. One of the worst atrocities happened when Stalin’s government took all the food from parts of Ukraine, letting some 7 million of its citizens starve to death even while the country continued to export food to other parts of the world.

But communist atrocities aside, some say removing the Confederate flag is still a step in the right direction and that it is wrong to make a comparison with communism.

“Amazon is a public company and they want to respond to the public, and public opinion is against the confederate flag,” Nomiki Konst, executive director of The Accountability Project, told FoxNews.com. She also noted that the U.S. generally has not been directly at war with communist countries.

“We didn’t have a real war against communism, but a very large proportion of our population was killed under the Confederate flag,” she said. “When the majority of Americans feel personally affected – the companies are being very smart about this.”

“This is further evidence of the liberal crusade against American history,” Dan Gainor of the Media Research Center told FoxNews.com.

“Apple and other liberal tech firms are undermining the traditional support of free speech on the Internet. And the reason they haven’t deleted communist items is they don’t see those as bad,” he said.