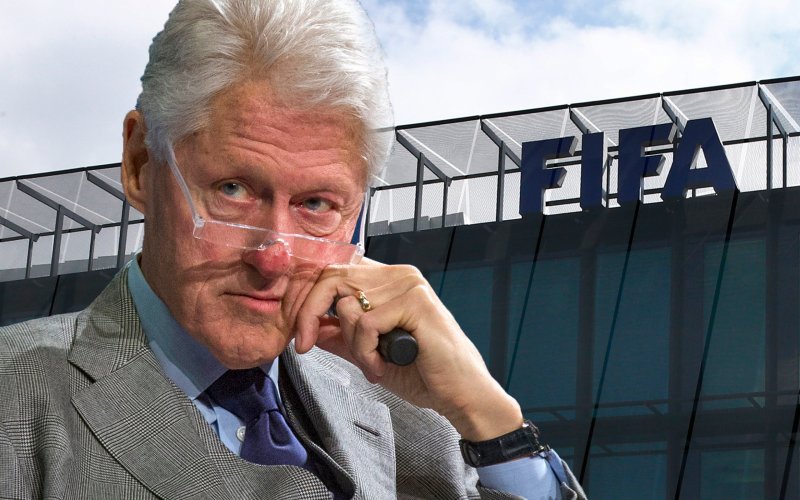 Both Bill Clinton and his family’s charity have been tied to soccer’s governing body, as well as [Muslim terrorist] Qatar’s disastrous World Cup bid.
And just like that, another Clinton Foundation donor is in the news.

The Clinton global charity has received between $50,000 and $100,000 from soccer’s governing body and has partnered with the Fédération Internationale de Football Association on several occasions, according to donor listings on the foundation’s website.

Several top FIFA executives were arrested Wednesday in Zurich and face corruption charges stretching back two decades, according to the U.S. Department of Justice.

Involvement with the embattled body extends beyond the foundation to Bill Clinton himself. The former president was an honorary chairman of the bid committee put together to promote the United States as a possible host nation for the 2018 or 2022 World Cup.

When the U.S. lost the 2022 bid to Qatar, Clinton was rumored to be so upset he shattered a mirror.

But apparently Qatar tried to make it up to him.

The Qatar 2022 Supreme Committee, partnering with the State of Qatar, “committed to utilizing its research and development for sustainable infrastructure at the 2022 FIFA World Cup to improve food security in Qatar, the Middle East, and other arid and water-stressed regions throughout the world,” according to the Clinton Foundation website.

The cost of the two-year project is not listed on the Clinton Foundation website, but the Qatar 2022 committee gave the foundation between $250,000 and $500,000 in 2014 and the State of Qatar gave between $1 million and $5 million in previous, unspecified years.

FIFA, which has never been a bastion of ethics, was heavily criticized for awarding the 2018 and 2022 World Cup to Russia and Qatar, respectively, in part because of their abysmal human-rights records.

The Guardian reported in 2013 about “appalling labor abuses,” including possible forced labor and worker death on Qatar’s World Cup infrastructure projects. It is also considered to be too hot to play soccer in Qatar in the summer.

No Qatari officials have been arrested, but Swiss authorities announced Wednesday that they had opened criminal proceedings into the allocation of the Qatari and Russian World Cups. They have also seized documents from FIFA’s headquarters and gained access to the Swiss bank accounts of executives they suspect of “unjust enrichment” and money laundering.